Steve Jobs’ Original Hand Made Apple 1 Computer Up For Auction, Could Sell For $500,000 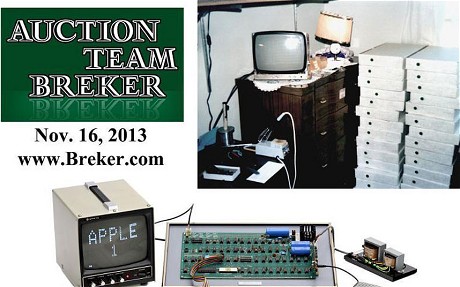 Steve Jobs’ original hand-built Apple 1 Computer, also known as ‘No. 46’, will be auctioned on November 16 by AuctionTeamBreker of Cologne, Germany, which is expected to sell for up to US $500,000, The Telegraph is reporting. The Apple 1 Computer is in working order and comes from the first batch of 50 computers by Apple’s first client, the Byte Shop.

Apple’s instant brand recognition and customer loyalty for its newest, as well as its oldest, products is one of the main factors behind its record prices.

Collectors could buy the computer out of nostalgia, as it carries historical importance as one of the first affordable home computers.

Earlier this year, another 1976 Apple 1 Computer broke all records when it was sold for US $671,400 to an anonymous wealthy Far East entrepreneur. But what’s unique about the ‘No. 46’ is that it is the only known example which still has its original white cardboard box. The report notes that the computer is being billed as ‘Straight from Steve Jobs’ Bedroom’ as it appears in a photograph of his bedroom in his parental house.

Apple’s older computers have been changing hands privately for many years but have lately started to appear at public auctions.