Microsoft has just announced the Surface Duo dual-screen device, with sales to begin next month, earlier than the original holiday 2020 target. 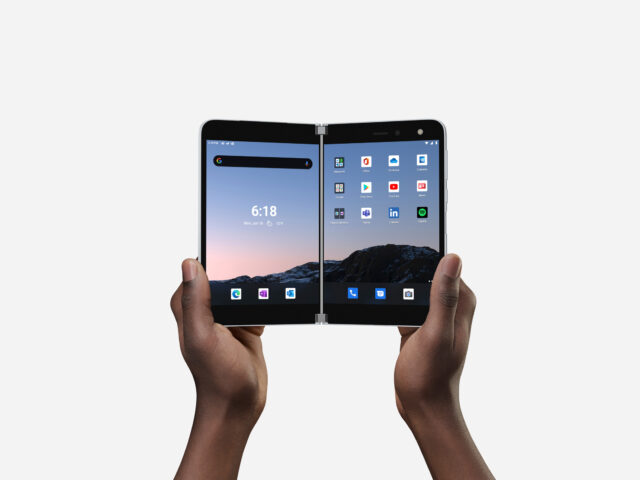 Four years after abandoning the smartphone game and distancing itself from plans to resurrect its Windows phone operating system, the US company will launch a device at almost exactly the same time that Apple will reveal its iPhone 12 lineup.

The Surface Duo is a dual-screen device that marks Microsoft’s debut in the Android mobile hardware market. The new product runs Android 10 but will receive the upgrade to Android 11 in the coming months.

Unveiled today and shipping September 10, Surface Duo represents the next wave of mobile productivity, inspiring people to rethink what is possible with the device in their pocket. Surface Duo delivers the easiest way to multitask on the go, bringing together the power of Microsoft 365 experiences and the full ecosystem of Android mobile apps. Starting at $1,399, Surface Duo opens into the thinnest mobile device on the market with an 8.1″ PixelSense Fusion display connected by a revolutionary 360-degree hinge, allowing you to use each 5.6″ display individually or together, across a variety of modes. Do more wherever you are with Surface Duo.

Under the hood, the Surface Duo packs a powerful Snapdragon 855 processor, and 6GB RAM, 128GB or 256GB of UFS 3.0 storage, and a 3,577mAh battery. While one might recognize that those aren’t quite top-of-the-line specs, they’re not too shabby either.

Unlike most phones these days, the Surface Duo only has a single camera — an 11-megapixel f/2.0 shooter that supports a low light mode, HDR multi-frame shots, 4K video recording at 30fps and 60fps, and up to 7x digital zoom.

It also will not feature 5G connectivity, while still having a price higher than Samsung’s Galaxy Z Fold 2, which does come with enhanced connectivity.

Microsoft is pitching the Duo as a more useful tool than a conventional smartphone, since it enables users to multitask with two separate apps or web pages at a time. CEO Satya Nadella, for instance, uses one screen to take notes and the other to read a book on Amazon’s Kindle app.

The Surface Duo will hit shelves on September 10 for $1,399 USD, with pre-orders open now in the US via AT&T, Best Buy, and the Microsoft online store.