Yesterday we told you about how some users have started to see Terms of Service when trying to add CIBC Visa cards to Apple Pay. Many suspect this means Canadian bank support may be coming soon, coupled with the recent discovery of “NetworkInterac” found within iOS 9.2.1 code.

Conspiracy theorists, warm up your engines because the next clue of Apple Pay being supported by a Canadian bank comes from Tangerine, the subsidiary of Scotiabank.

iPhone in Canada reader Cameron shares with us the Facebook Messenger conversation he had with a customer service rep, when he asked about MasterCard support for Apple Pay from the bank.

The representative answered “while our MasterCard currently doesn’t support Apple Pay, we’re confident it will in the near future,” followed by a “stay tuned” and smiley face. 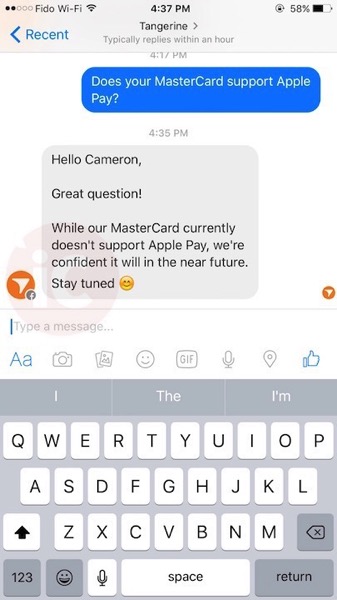 This is in contrast to TD Canada Trust, whose reps coldly told us “We have no news to share regarding the available of Apple Pay at this time. We’ll certainly provide any updates on our website if and when they become available. We appreciate your interest.” Last fall, TD accidentally leaked Apple Pay support on their website, under “Ways to Pay”.

Tonight, when Beijing local time hits 5AM on February 18, Apple Pay should be launching in mainland China for UnionPay cardholders. If any other Apple Pay updates are coming as well, it would be either at this same time or possible at the company’s special event next month for iPad Air 3/iPhone 5se, or WWDC later this summer.

What’s your interpretation of Tangerine’s response to Apple Pay support?