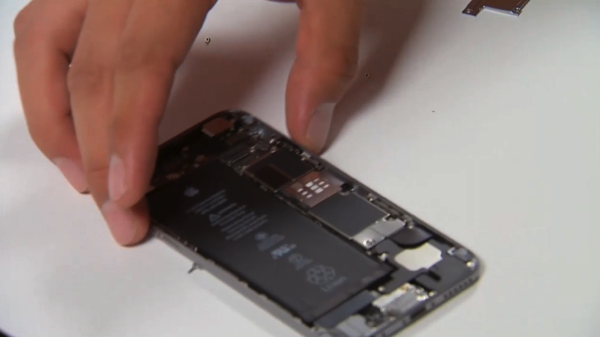 Although the BOM surpasses that of the iPhone 5s, Apple’s gross margins reach 70% for the high-end models, IHS says: the company charges $100 to $200 more for iPhones with higher internal storage, but in fact the company is spending only $47 more on the 128 GB version, if we compare it to the 16 GB model. By contrast, the gross margin on the iPhone 5 and the iPhone 5s was 69%.

“They seem to be configured and priced to encourage you to buy the models with the higher memory,” said Andrew Rassweiler, the IHS analyst who supervised the teardown. He estimates that Apple is paying a price of about 42 cents per gigabyte on the flash memory, which is supplied by numerous companies, including Micron and SK Hynix.

So what’s the most costly component? Well, it’s the touch screen provided by LG Display and Japan Display, which costs $45 on the iPhone 6 and $52.50 on the iPhone 6 Plus. Last year the bill was $41 for the 4-inch size.

As the Chipworks analysis reveals, Apple’s A8 chip was manufactured by TSMC using a 20 nm process. The A8 and the co-processor handling data from the iPhone’s sensors are estimated to cost $20, while the NFC chip manufactured by NXP and the NFC booster (the groundbreaking NFC antenna mentioned during the event) is supplied by AMS AG. These are estimated to cost $22 for both phones.

The teardown also revealed that the iPhone 6 units sport two accelerometers and a barometric sensor provided by Bosh, while the list of other suppliers had already been revealed by the iFixit teardown.