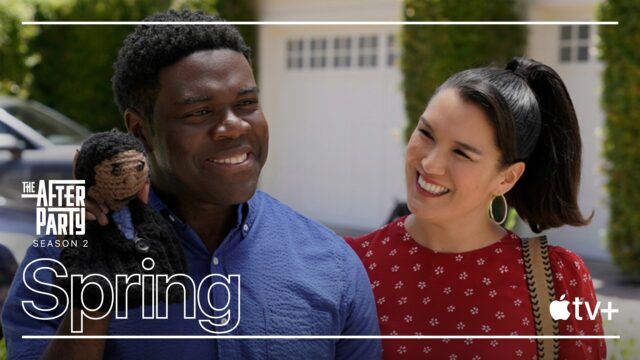 Apple original series The Afterparty is making its sophomore debut on Apple TV+ this spring. Nearly a year after Apple officially greenlit a second season, The Afterparty has now been given a release date of April 28th for the follow-up to the early 2022 inaugural season.

In a Tweet thread cataloguing upcoming Apple TV+ debuts, the company gave us a new sneak peek into the upcoming season. The company announces, “Season two of murder mystery comedy series #TheAfterparty finds Tiffany Haddish’s ‘Detective Danner’ on a new case: a murder at a wedding.” A still image shows returning actors Sam Richardson and Zoe Chao who played Aniq and Zoe in the first season.

At the same time, the creators and cast of the comedy/murder mystery series came on stage during the 2023 Winter Television Critics Association Press Tour to announce that the season of The Afterparty would debut on April 28th. The new season is expected to debut with two new episodes followed by a weekly episodic rollout, according to Collider. Thus, season two of The Afterparty is said to conclude on Friday, June 23, 2023.

The Afterparty is written and helmed by Chis Miller of 21 Jump Street, Spider-Man: Into the Spider-Verse fame. The first season revolved around a group of characters celebrating at an after-party for their high school reunion. It isn’t until the host turns up dead that everything takes a turn. Each episode revolves around a different character recounting the night’s events while different genres and creative tropes are woven into their stories ala musical, romance, noir, etc.

Apple TV+ is available in Canada as a monthly subscription. It is also available via an Apple One bundle.

Fresh off the heels of the launch of Apple's HomePod (2nd-Gen), TF International Securities' Apple analyst Ming-Chi Kuo believes a successor to the HomePod mini 2 could be on its way. In a tweet thread surrounding Apple supplier Goertek, Kuo discussed that the Weifang-based components company has "secured NPI and assembly orders" for the ‌HomePod mini‌...
Steve Vegvari
47 mins ago