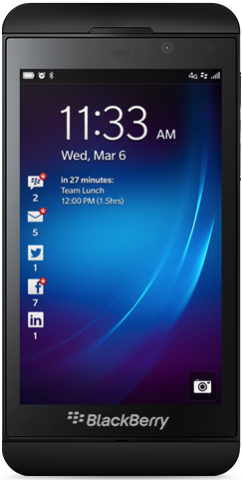 It’s no secret that I’m a big Apple / iOS fan, and I’ve been pretty hard on RIM over the past few years. I used to be a BlackBerry believer, and in my day job I work with BlackBerry, BES5 and BES10 regularly. But, when the iPhone came along and Android matured into a usable alternative, things at RIM went off the rails hard and fast. What was once an industry-leading tech company collapsed into an out of touch has-been that’s regularly derided for getting run over while standing still, then not having the common sense to recognize or admit it. Over the past 5 years, through a series of missteps and blunders by management along with a healthy dose of denial, RIM has fallen to single digit share in key markets and have lost millions of existing and potential new customers. Their Playbook offering failed to gain traction in the tablet market (again due to management missteps), and over the past year we’ve been told repeatedly that BlackBerry 10 was the game changer that would turn things around and save the company.

On Wednesday, in a 90 minute press event, the rubber hit the road when RIM (now renamed to BlackBerry) introduced the world to the Z10 and Q10 devices running the new BlackBerry 10 OS. The event itself was average (they could learn a thing or two from Apple on how to run a product launch), and was hardly the best example of how to introduce products that will either save your bacon or accelerate your spiral into obscurity. After a late start and several minutes of odd telethon-style webcast banter (including chopping the pony-tail off a Crackberry blogger), Thorsten Heins took to the stage and spent the next 15 minutes talking, clapping, and trying to get the audience excited without actually saying much. It was almost 30 awkward and forced minutes after the event started before the new BlackBerry 10 devices were actually mentioned.

Two device models were announced, the touch screen Z10 and the physical keyboard-based Q10. The presentation focused mostly on the Z10 (since the Q10 is shipping later), demos of various key features of the BlackBerry 10 OS, the announcement of key launch day apps, and the fact that Alicia Keys was now the “creative director” for the company (whatever that means).

Keys talked with Heins about how she had abandoned her original BlackBerry for something more sexy (i.e. iPhone), but stated that she and BlackBerry were “exclusively dating” again. I’m not clear how having someone like Keys will compel people to purchase or use BlackBerry 10 devices, and I suppose one shouldn’t inquire why her Twitter history shows her using the Twitter app (now available for BB10) and Instagram for iPhone (which isn’t available for BlackBerry 10) as recently as 48 hours ago. Perhaps her exclusivity is less than 24 hours old…

The odd thing during the presentation was a distinct lack of discussion regarding the new hardware itself. Yes they did demos, and while it’s not necessary to inundate the audience with speeds and feeds, it wouldn’t have hurt to at least mention basics like weight, screen resolution, battery life, storage capacities, or even available colours. Little was said in this regard and finding technical info online after the event was a challenge since it took BlackBerry several hours to get their website updated with the new model info. Pricing info during the presentation was almost non-existent (“ask your carrier”), and availability of the Z10 seemed to be either “tomorrow”, “next week”, or “soon”. The Q10 barely got a mention but is targeted for a Spring launch. Personally, if my company was in a death spiral I’d go out of my way to let people know exactly “how much” and “when” rather then leaving them to find this info from their local carrier.

The question now is, will it be enough?

The challenge BlackBerry faces isn’t just to stem the loss of existing customers, but to steal a good number from Apple, Google, and Microsoft. It’s not enough to finally make a full touchscreen smartphone that doesn’t suck (remember the Storm?) so that their admittedly loyal fans don’t have to tolerate the painful mess that is BlackBerry 7. They need to make something that compels a large number of iOS and Android owners (and to a lesser extent Windows Phone users) to consider the Z10 as an alternative. While the new OS is better and the Z10 hardware is decent, neither seem to offer a compelling reason for a current iOS or Android user to switch, or for a user considering iOS or Android to consider BlackBerry instead. They’ve simply added another option to the mix without providing a compelling reason to choose it over the others. 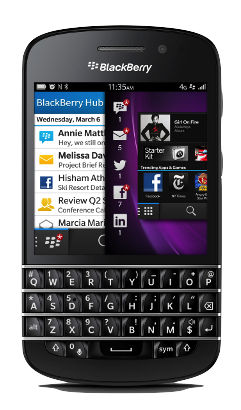 I have no doubt that existing BlackBerry users will jump on the new products, as both devices are miles head of the existing BlackBerry products (although the Q10 looks suspiciously like a 9900 with a slightly bigger touch screen). Corporate customers who were considering abandoning BlackBerry may stick with them, and some as-yet undecided consumers will choose a Z10 over iOS or Android. I expect that in the near term BlackBerry will announce decent sales numbers, but I also expect that will taper off once the initial excitement wears thin.

At the end of the day, when compared to the iPhone 5, Nexus 4, or Galaxy S3, the Z10 doesn’t really stand out from the crowd, and the BlackBerry 10 OS, while offering many improvements, is strangely featureless with little in the way of killer features or apps that might make people stop and reconsider their choice of device.

In a world that already has Apple and Google battling for first place, BlackBerry is relegated to fighting Microsoft for 3rd place, a position that isn’t exactly generating impressive sales numbers for Microsoft these days. Maybe BlackBerry will be happy to be #3 or #4, but I don’t think the market will tolerate it. Unless they can find a way through these devices and the OS to gain significant market share and claw their way back to relevance, I feel all they have accomplished is to buy themselves a little more time before death comes calling.

BlackBerry 10 was the thing RIM told us to wait for, the thing that would turn the tide, the saviour that would return BlackBerry to relevance. Now that it’s launched all the cards are on the table, there’s nothing else to fall back on if they lose this final hand, and it’s a high stakes game.

Let the chips fall where they may.