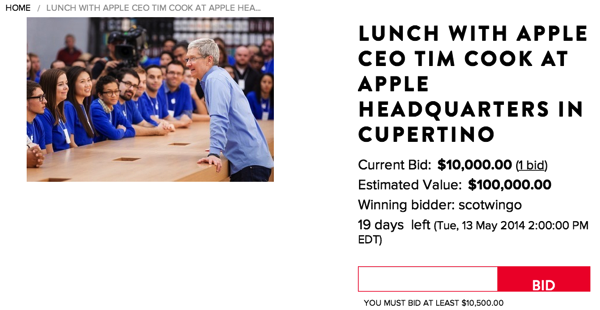 Apple CEO Tim Cook has joined CharityBuzz again to help raise money for charity. This time around, you can have lunch with Cook at Apple headquarters in Cupertino. Here’s the auction description:

Bid now on this unique opportunity to have lunch with Apple CEO Tim Cook at Apple headquarters.

Tim Cook is Apple’s CEO and serves on its board of directors. In 2012 he was named a runner-up to TIME’s Person of the Year and topped Vanity Fair’s New Establishment list. Before being named CEO in August 2011, Tim was Apple’s Chief Operating Officer and was responsible for all of the company’s worldwide sales and operations. He also headed Apple’s Macintosh division. Tim earned an MBA from Duke University, where he was a Fuqua Scholar, and a Bachelor of Science degree in Industrial Engineering from Auburn University.

The auction is valid for 2 people and the experience will be for 1 hour with Cook. Guess what? The cost of the meal is included! It says it may take up to 1 year to schedule the lunch based on availability, and winners must “conduct themselves appropriately.”

“Tech stars have become the new rock stars of the digital age…It’s a sign of the times that nothing is in higher demand than access to industry titans like Tim Cook. In fact, the power meeting with Cook last year brought in more money for the RFK Center than experiences with some of Hollywood’s A-list celebrities.”

Last year Cook also put himself up for auction but for ‘coffee’ at Apple HQ, again to raise money for the RFK Center for Justice and Human Rights. That auction ended at over $600,000. Anyone going to bid for this? Don’t be such a cheapskate, it’s for charity…