Time Person of the Year Goes to Ebola Fighters, Not Tim Cook 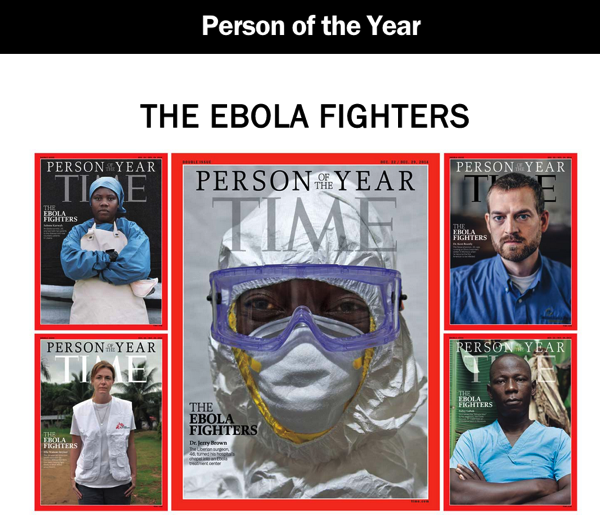 Apple’s CEO Tim Cook was among the eight finalists for the Time Magazine 2014 Person of the Year, but this year the publication announced that the honourable title won’t go to a single person, but rather to a number of people who have fought against Ebola in Africa.

Ebola is a war, and a warning. The global health system is nowhere close to strong enough to keep us safe from infectious disease, and “us” means everyone, not just those in faraway places where this is one threat among many that claim lives every day. The rest of the world can sleep at night because a group of men and women are willing to stand and fight. For tireless acts of courage and mercy, for buying the world time to boost its defenses, for risking, for persisting, for sacrificing and saving, the Ebola fighters are TIME’s 2014 Person of the Year, writes Nancy Gibbs for the Time.

The Person of the Year honour dates back to 1928, when Time magazine chose Charles Lindbergh as the Man of the Year for 1927. Since then, the magazine has annually designated one man, woman, couple, or concept that had a measurable influence on the world during the previous 12 months.

Users who have updated their Macs to last month's macOS 13.2 release are reporting that their Pioneer CD/DVD drives are no longer working (via MacRumors). Apparently, the latest version of macOS Ventura is not compatible with Pioneer's lineup of USB-connected CD, DVD, and Blu-ray drives for the Mac. Apple rolled out macOS 13.2 with support for...
Usman Qureshi
11 mins ago

Orbital Knight’s Castle Crumble has just arrived on the Apple Arcade, allowing you to embark on an adventure and conquer a variety of kingdoms. In Castle Crumble your goal is clear - castles must fall. You play to become a hero in far fantasylands. 🏰 New Release 🏰 Castles. Must. Fall. In Castle Crumble from @orbital_knight, you'll...
Usman Qureshi
24 mins ago

The folks over at YouTube channel Max Tech have today shared a comparison video of the 2023 M2 Max 16-inch MacBook Pro and the MSI Z16 PC laptop. In an earlier comparison, the new M2 MacBook Pro was pitted against the M1 Max MacBook Pro, in which they highlighted the High Power Mode on the 16-inch MacBooks. The High-Power Mode...
Usman Qureshi
33 mins ago