Last year, the Twitter Blue subscription debuted in Canada for CAD $3.49/month, offering a bunch of extra features for its subscribers, and today, that price has gone up to CAD $6.49/month. 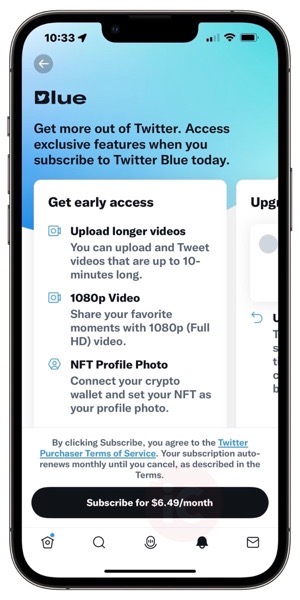 For those who aren’t familiar, the Twitter Blue subscription offers the following features:

In an email to subscribers, the Twitter Blue team insisted that the higher rate “helps us continue to build some of the features you’ve been asking for, and improve upon the current ones you already love.”

The email also teased a “more frictionless reading experience” in the works, among other features set to launch in Twitter Blue Labs.

🗣 Available now in Top Articles—a new way to find even more content you want to read:

Twitter says existing subscribers will stay locked in at the original price until October and can expect to receive an opportunity to cancel at least 30 days before the new rate takes effect.

Twitter Blue is currently available in Australia, Canada, New Zealand, and the U.S. The price increase for new Twitter Blue subscribers in Canada went into effect on July 28th, 2022.

Back in July, Netflix announced it had picked Microsoft to power its upcoming ad-supported tier. This discounted tier would make up for its cheaper price by showing ads within shows and movies within the streaming service. Now, it appears this ‘Netflix with Ads’ tier will lack a major feature of regular subscriptions: offline downloads. According...
Gary Ng
45 mins ago