The NFL and Twitter have announced today a multi-year video deal, which will bring official NFL video and other content to fans around the world, year-round, which also includes support for Canada.

A new 30-minute live NFL show will air on Twitter five days per week during the NFL season, hosted by NFL Network talent to cover news, highlights and more.

Periscope and Twitter will bring fans live pre-game coverage for the “ultimate” behind-the-scenes coverage during key match-ups and primetime games.

Video clips will also be available on Twitter showing highlights, breaking news, and more like “Throwback Thursday”, for fans.

“Twitter continues to be an important partner in accessing millions of highly engaged fans on digital media,” said Brian Rolapp, Chief Media and Business Officer for the NFL. “We have every expectation that the new daily live show, produced by NFL Network and featuring some of our top analysts, will quickly become some of the most popular programming on Twitter.” 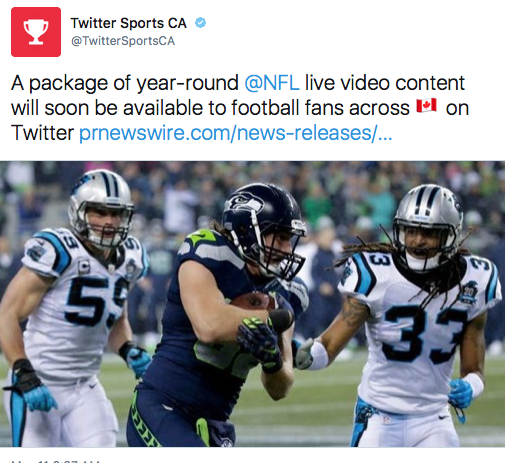 Twitter COO Anthony Noto said in a statement, “This new multiyear collaboration will bring compelling live studio programs that discuss what’s happening in the NFL, unique behind the scenes live broadcasts before games, and the best NFL highlights to Twitter, alongside the real-time NFL conversation.”