Twitter previously announced it was set to end its legacy API in June, meaning third-party developers and their Twitter clients such as Talon, Tweetbot, Tweetings and Twitterrific would eventually break, as push notifications would no longer work and timelines would not refresh automatically.

Today, Twitter has announced they have pushed back the end date for its older API to August 16th, giving third-party developers some more time to migrate:

Site Streams, User Streams, and legacy Direct Message endpoints, originally slated for retirement on June 19th 2018, will be deprecated on Wednesday August 16, 2018 which provides 3 months from today’s release of the Account Activity API for migration. 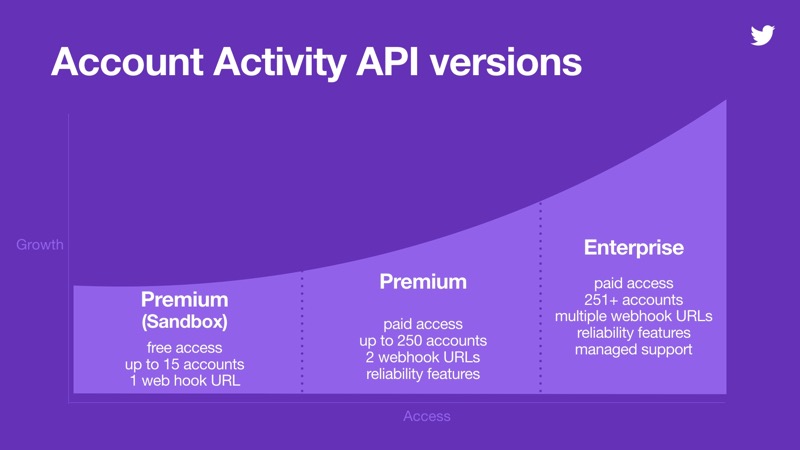 Twitter also revealed its new pricing structure, which is looking to be too costly for some third party Twitter developers, such as Sean Heber from Twitterrific.

When asked by another user if a subscription could keep Twitterrific viable, Heber responded “It would have to be a subscription. And from the public numbers, it’d have to be a pretty expensive subscription,” noting it would at least $5 per month and even then, would still “lose live streaming in the app.”

It’s listed as $2,899/month to get activity updates… for 250 users. That’s over $10/user/month! They might have better pricing at the enterprise level which is where my $5/mo guess comes from. (only a guess)

With Tapbots releasing TweetBot 3 for Mac yesterday at $13.99 CAD, some Twitter users remain hesitant on purchasing due to the future of API features access for third party clients.

Earlier this year, Twitter killed its own Mac client, saying “We’re focusing our efforts on a great Twitter experience that’s consistent across platforms. So, starting today the Twitter for Mac app will no longer be available for download, and in 30 days will no longer be supported,” instead urging users to use Twitter on the web.