If you’re craving a Big Mac, you can now get it delivered by UberEATS in Ottawa, as McDonald’s Canada confirmed to CTV starting today, selection restaurant locations in the city will be included as part of the fast food chain’s participation with Uber. 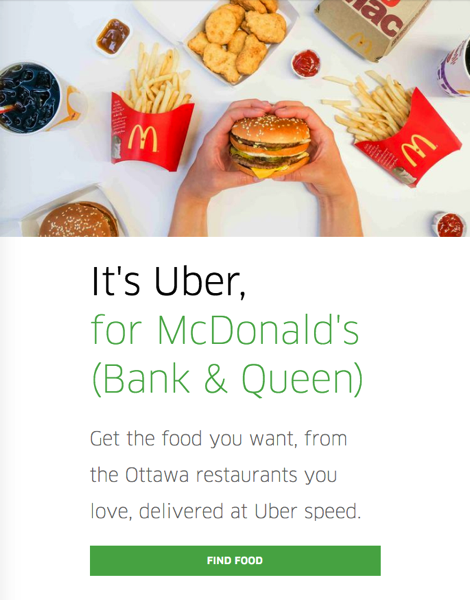 CTV says the McDonald’s location on Rideau Street near HBC placed a sign outside the restaurant, to indicate its participation with UberEATS delivery. The UberEATS website for Ottawa also lists the Bank & Queen location as offering delivery as well.

Last month, McDonald’s and Uber launched their international roll out of their partnership, bringing fast food delivery to select cities. In the U.S., “McDelivery” is available from 1,000 locations, with delivery fees ranging by city, but are usually a flat $4.99 USD.

Let us know if you’re going to get McDonald’s delivered by UberEATS in Ottawa—your hangover will thank you later.

Later this year, McDonald’s will debut a mobile ordering app in Canada.