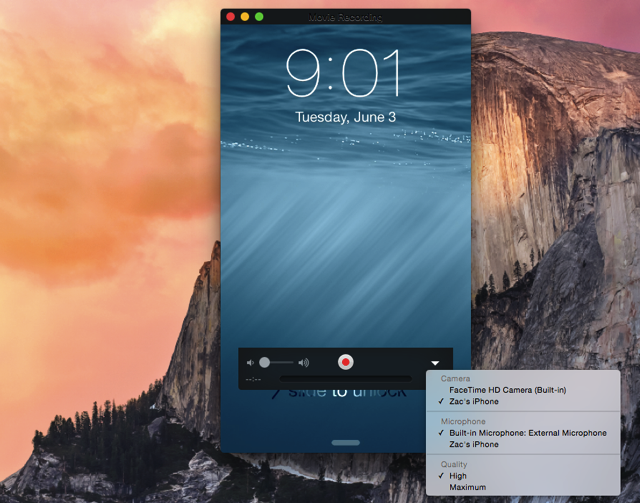 With iOS 8 and OS X Yosemite, Apple has made it possible to capture real-time footage of apps directly off an iPhone, iPad, or iPod touch, as pointed out by 9to5Mac. Once you connect an iOS 8 device to your Mac running OS X 10.10, it will be automatically available as a video camera. You can then capture anything you’re doing on-screen directly to your Mac using QuickTime Player.

“Apple positions the feature as a way to help developers quickly make app previews, which Apple introduced as part of iOS 8?s improvements to the App Store, but there is no reason why this couldn’t be used by others for different purposes. When plugging an iPad or iPhone running iOS 8 into a Mac running OS X Yosemite via USB, the iOS device now shows up as a standard camera input. This means any video app can be used to record the screen of the iOS device without the need for additional hardware.”

According to Apple’s documentation, the feature is targeted at developers for making app previews, though it is not limited to being a developer-only feature. Users can edit captured footage using their favorite video editing app and upload it to social media. Developers on the other hand can upload this footage to iTunes Connect, just like app screenshots, to submit for review along with their next app update.

Currently, the feature is in beta and recording is quite laggy, though it should improve significantly by the time public versions of iOS 8 and OS X Yosemite are released.