What to Expect from Apple’s ‘Gather Round’ iPhone Event

Apple is set to kick off its ‘Gather Round’ special event today at 10AM PDT/1PM EDT at the Steve Jobs Theater at Apple Park, in Cupertino, California. 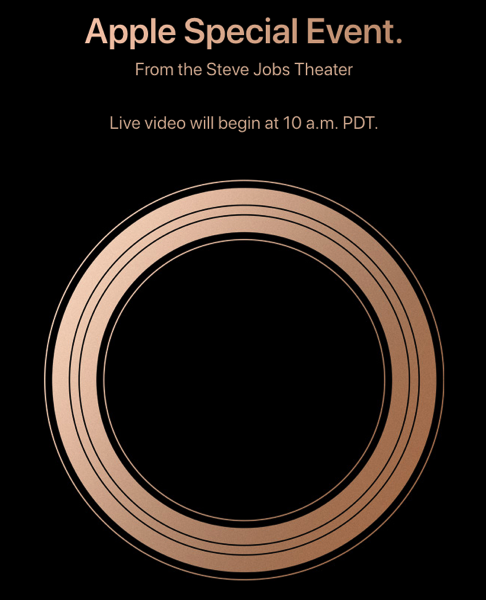 What can we expect Apple to announce on stage today at its annual iPhone event? A plethora of leaks have already occurred so let’s recap what we can probably expect to be announced.

iPhone – Apple will debut its iPhone XS (Xs?) and iPhone XS Max with 5.8-inch and 6.5-inch display sizes, rumoured to house OLED displays like iPhone X, as seen from this morning’s leak.

Another 6.1-inch iPhone XR (Xr?) is set to debut based on this morning’s leak, and rumours believe it will be ‘lower cost’ and have an LCD display.

Apple Watch – The new Apple Watch may drop the ‘Series 4’ moniker for this year, as Apple’s website leak this morning made no mention of it, only citing ‘Apple Watch’. The new display sizes will come in 40mm and 44mm sizes, increasing 2mm compared to the previous generation.

AirPods – no mention or leaks of second-generation AirPods, which were rumoured to include “Hey Siri” support and a wireless charging case.

iPad Pro – new iPad Pro models were expected to debut with Face ID and thinner bezels, but today’s website leak made no mention of the newer pro tablet. However, iOS 12 beta leaks have suggested it should be coming soon.

AirPower – Apple’s wireless charging mat was not mentioned either and it continues to be delayed since being announced a year ago.

MacBook – Earlier rumours from Bloomberg cited a refreshed and cheaper MacBook was coming, along with a Mac mini ‘Pro’ later this year.

Again, Apple could surprise us with some goodies as CEO Tim Cook may drop a “one more thing”, but given the special event usually has two hours, it’ll be tough to cram in so many announcements. Maybe a second smaller special event could be coming dedicated to a major iPad Pro refresh?

Apple’s event kicks off in under two hours and we’ll have all the coverage you’ll need here plus real-time updates from our Twitter account @iPhoneinCanada.

Meta Platforms CEO Mark Zuckerberg on Wednesday joined a growing list of industry leaders, regulators, and entire countries that are unhappy with Apple's App Store dominance, saying that it raises a "conflict of interest" for the iPhone maker (via Fortune). "It is problematic for one company to be able to control what app experiences end...
Nehal Malik
40 mins ago