Apple’s strong quarterly sales were somewhat overshadowed by falling revenues in Greater China. Apple has slipped to 5th place by retaining 9% of the $80 billion smartphone market in that country. In contrast, Samsung holds 19% of the market and continues its successful foray into the country. But how could this happen? Reuters has the details.


In the fight for market share, Samsung and Apple represent two completely different approaches, and it looks like the South Korean manufacturer’s scenario works better. But there is something we often forget when it comes to the battle for Chinese customers: Samsung began its experience in Greater China much earlier than Apple. It opened its first office in China back in 1985 in Beijing, while Apple opened its first store in 2008. 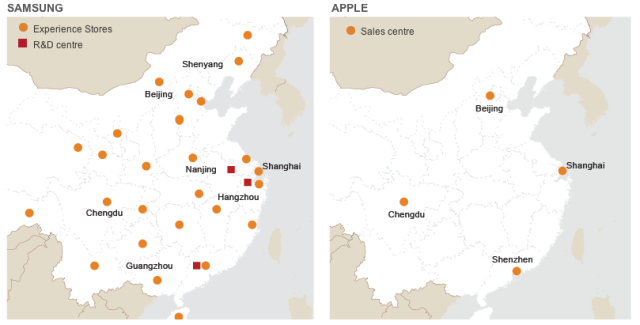 We have already shed light on some of the tricks the South Korean company uses to market its brand. It markets five different models of the same Galaxy S4 model — but there is much more to it than that: Samsung’s ever-present retail stores are stuffed with multiple models, while Apple has only eight stores in four cities and it launches only one model a year. To put that into numbers: Samsung smartphones outnumber iPhones at least four to one.

Furthermore, there is the issue of price. While Apple targets the high-end market, Samsung’s models have different specs and they are marketed to different price points.

What’s interesting is that Chinese customers are after feature-rich smartphones. This favours Samsung, since the South Korean OEM targets them with localized feature-tailored handsets.

“The Chinese just love features. They want their phone to have 50 different things that they’re never going to use,” said Michael Clendenin, managing director of technology consultancy RedTech Advisors. “Apple just doesn’t play that game. Unfortunately, if you want to hit the mainstream market in China, and you want a lot of market share percentage points, you have to offer the Swiss army knife of cellphones.”

As the above example shows, Samsung appears to be more dynamic and it constantly adapts to the local market and its needs, while Apple’s Californian cool remains a niche market.

A major factor influencing Apple’s sales is that it only works with three carriers. For example in Guangzhou province it has 95 official distributors and resellers, while Samsung has 200 in the same area. And Samsung has a contract with all Chinese telecoms.

What’s more interesting is that the Chinese government is aware of Apple, but this isn’t always a good thing. You might recall that the company has faced criticism over its one-year service warranty, which triggered an apology letter from Tim Cook. I don’t want to say that Apple is under scrutiny in China, but it has had its bad moments.

“What surprised me most,” said Lee later, “was that they (Chinese leadership) know very well about Samsung. They even have a group studying us.”

Finally, Apple has managed to put a dent in the $80 billion Chinese smartphone market, but Samsung’s strategy of targeting both high- and low-end markets worked better. Samsung’s strategy has been helped by the company’s earlier presence in the market. It remains to be seen whether Apple will change its strategy and launch a polycarbonate iPhone. This could boost its market presence in Greater China, since the average wage is roughly $640 per month, and many users looking to upgrade from feature phones to smartphones simply can’t afford an iPhone.