The Wall Street Journal reports Microsoft is jumping into the smart watch race to rival Apple’s rumoured ambitions for a similar device (Samsung also is rumoured to release a watch as well). According to executives within Microsoft’s supply chain:

Microsoft Corp. is working on designs for a touch-enabled watch device, executives at suppliers said, potentially joining rivals like Apple Inc. in working on a new class of computing products.

Earlier this year, Microsoft asked suppliers in Asia to ship components for a potential watch-style device, the executives said. One executive said he met with Microsoft’s research and development team at the software company’s Redmond, Wash., headquarters. But it’s unclear whether Microsoft will opt to move ahead with the watch, they said.

One executive within the supply chain stated Microsoft had asked for 1.5-inch displays from component manufacturers. The WSJ notes this isn’t the first time Microsoft has aimed to released a watch, as ten years ago the company had developed Smart Personal Object Technology (SPOT) to incorporate into household electronics and other devices. One of the first SPOT smart watches was the Suunto n3, which had data (news headlines, sports scores, weather, etc) sent to the device via FM radio for annual subscription fee; however sales ended in 2008. The watches used the MSN Direct Network and was available to cities in the USA and Canada. 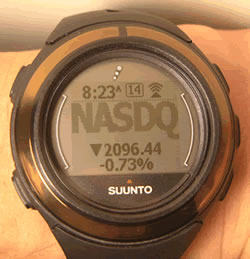 Back in February, the New York Times and WSJ reported Apple was testing a curved smart watch device. Bloomberg followed up with a similar report, detailing how over 100 designers were purportedly working on an Apple wristwatch.

With the popularity of the Pebble smart watch taking over the world by storm, it’s clear this is one area where companies are planning their next move to make people start wearing watches again. Are you ready for Apple to take your money with their ‘iWatch’? Or even Microsoft for that matter? Or Samsung?