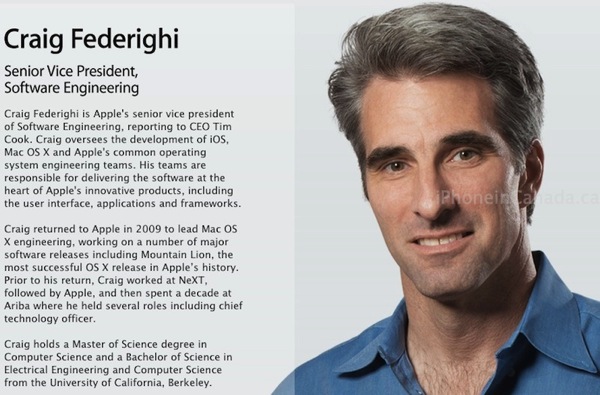 Federighi originated at NeXT, the company founded by Steve Jobs and eventually moved over to Apple after the latter was acquired in 1997. Known to have a deep focus and be easygoing, Federighi has long been out of the spotlight during his tenure working on enterprise software.

He was recruited back to Apple in 2009 after a decade at Ariba and began to take on more responsibilities on the Mac software engineering side. According to a source who worked for both men, Federighi’s relationship with Forstall “was more amicable” than other executives.

Back in August of last year he was promoted to a senior vice president role and following the departure of former iOS chief Scott Forstall, he was put in charge to lead iOS and OS X last October.

As for Federighi, he has been compared to CEO Tim Cook for his preference to get consensus on decisions, opposed to the confrontational Forstall, known to be a byproduct of Steve Jobs:

Several people who know both men said Mr. Federighi is similar to CEO Tim Cook, with both men preferring to get consensus on decisions. Mr. Fortsall, on the other hand, took his cues from Mr. Jobs, who was more confrontational.

“Scott and Craig are incredibly bright but Craig is more compatible with Tim,” the person who knows both men said.

Apple employees note Federighi’s leadership was key in putting iOS 7 together and having the beta ready for WWDC 2013:

In recent months, Mr. Federighi’s leadership was key to getting the developer version of the software out of the door, say Apple employees.

Parts of iOS 7 were already in the works, these people say. But they say that he was instrumental in the release and pulling it all together.

When Federighi was put in charge of iOS and OS X last fall, people familiar with the situation say he addressed both teams and took his time in deciding how to combine them, ultimately keeping many groups separate, despite overlap.

Federighi is also known to reply to emails quickly, making him one of the most responsive Apple executives; he also often declines social invites instead to rather focus on his desire to work. Nonetheless, Federighi has emerged as one of the most exciting Apple executive presenters, as his ability to capture your attention and convey vitality while on stage is second to none.