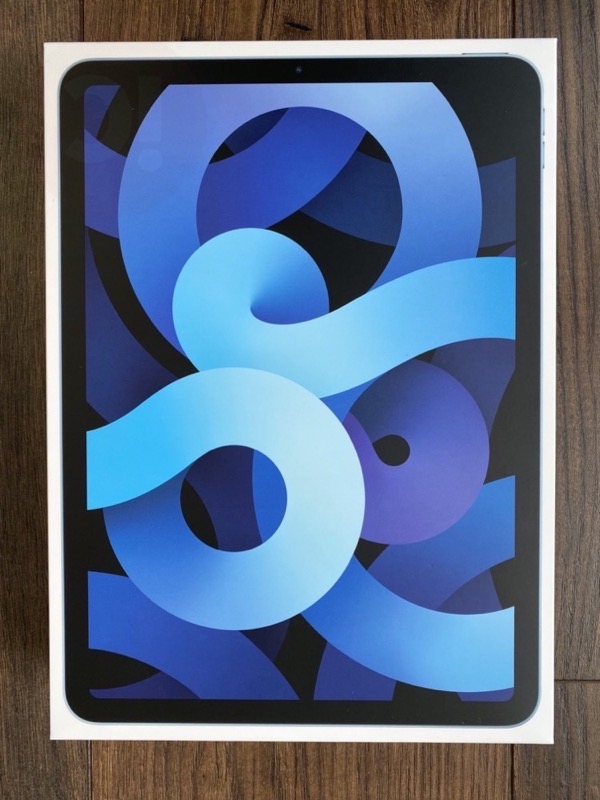 Say it with me: “I’m Good Enough, I’m Smart Enough, and Doggone It, People Like Me!” Thank you, Stuart Smalley, for our daily affirmation.

Here’s our quick hands-on review with the 2020 iPad Air with 10.9-inch Retina display, which is definitely the tablet to pick up if you’ve been holding out on a middle of the line iPad.

While the new iPhone 12 and iPhone 12 Pro are stealing recent headlines, Apple’s 2020 iPad Air received a new design and integrated Touch ID in a way we’ve never seen before—directly into the power button. 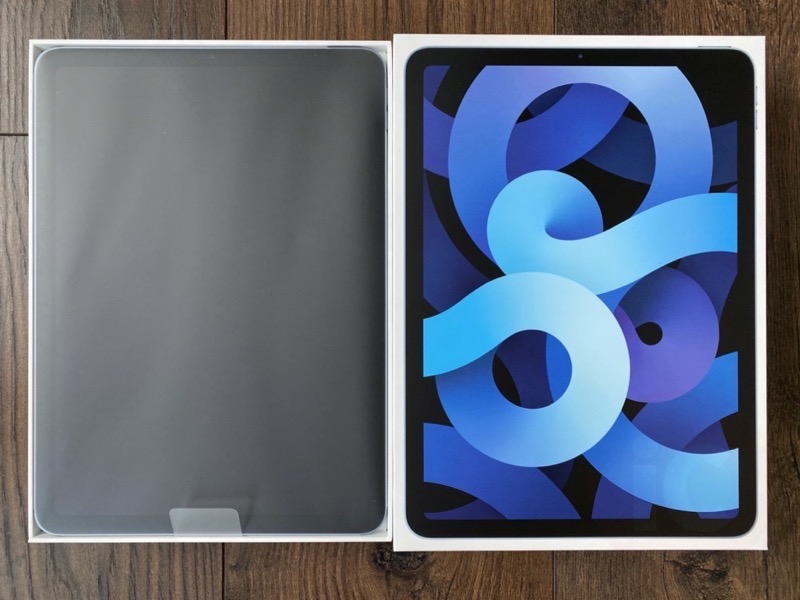 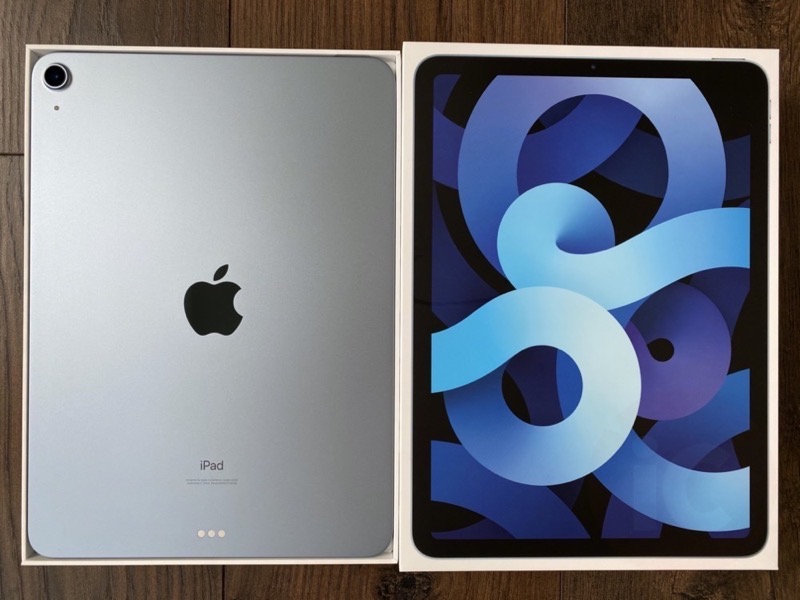 Here’s what’s inside the iPad Air—a USB-C cable and 20W USB-C power adapter, which would be convenient to use with your new MagSafe Charger (that doesn’t include a power adapter). But you do get TWO Apple stickers, unlike just one now in 2020 iPhone boxes. 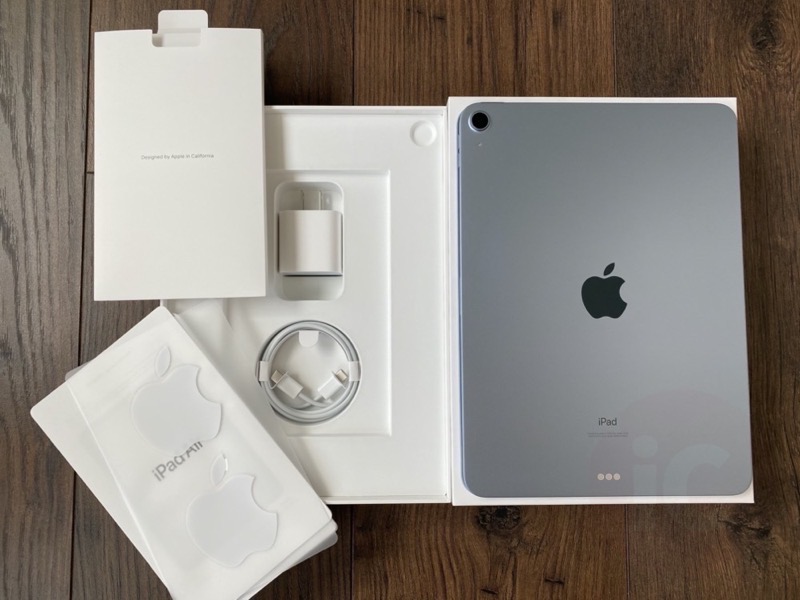 We don’t use an iPad that often. The majority of my time is spent on a MacBook Pro (slumming it with a 2016 Touch Bar) and an iPhone 11 Pro Max. I have an iPad 6 (2018) for casual surfing and as a second screen at times. But other than that, we don’t really use an iPad. 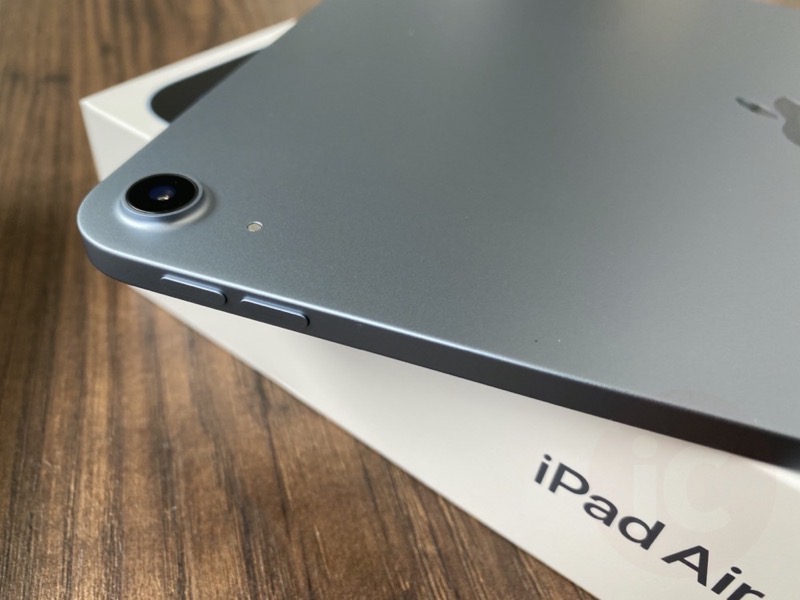 While we did enjoy our time with an iPad Pro 12.9-inch when it first launched, Face ID on an iPad can be a pain. You always need to ensure you’re staring at the camera and the latter isn’t blocked by your finger. Plus, the price you’re paying for an entry 128GB Wi-Fi 12.9-inch iPad Pro with Apple Pencil and Magic Keyboard is ridiculously expensive ($1,917 + taxes). It’s a bit overkill for Facebook.

But with the 2020 iPad Air, we finally get an iPad Pro-like design, no Face ID and now Touch ID integrated into a larger power button. And it’s frickin’ awesome. You can see the button with Touch ID below, covered in glass: 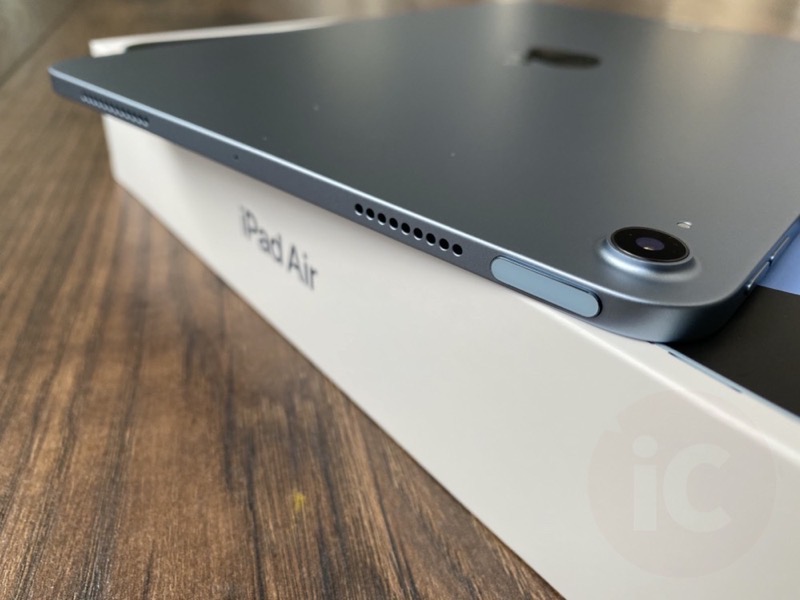 Now, no matter the orientation, as long as one of your fingers is touching the power button (not pressing), your iPad will unlock with ease. No more entering a passcode, ever. Now, if only Touch ID can return to the iPhone too, right?

You can learn more about Touch ID on the iPad Air, as explained by Apple VP of Product Marketing Bob Borchers and VP of Hardware Engineering John Ternus, on a recent podcast episode of YouTuber iJustine and Jenna Ezarik’s Same Brain podcast (head to the 8 minute and 30-second mark):

Here’s how the iPad Air (2020) in Sky Blue looks like next to the iPhone 12 Pro in Pacific Blue. Sky Blue almost shows up as silver in bright sunlight, as it’s not as vivid as you’d expect: 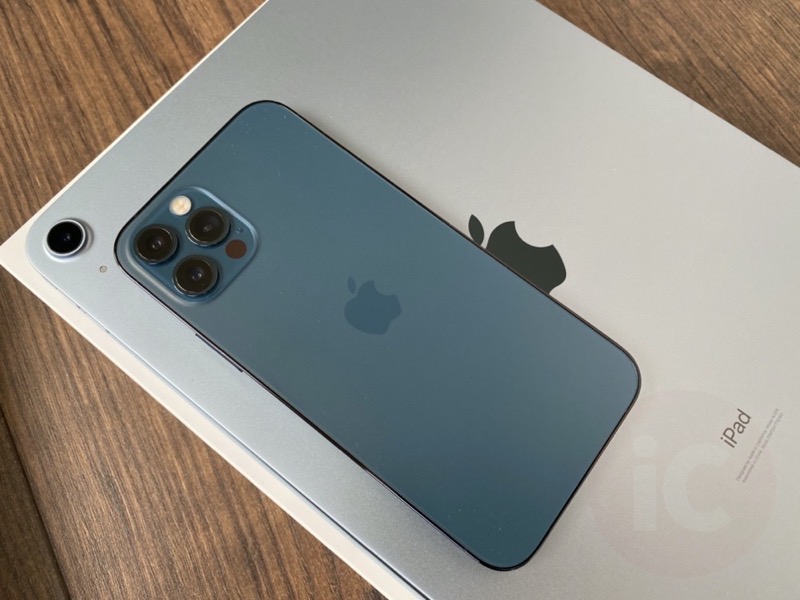 Beautifully rounded corners are on both the iPhone 12 Pro and iPad Air: 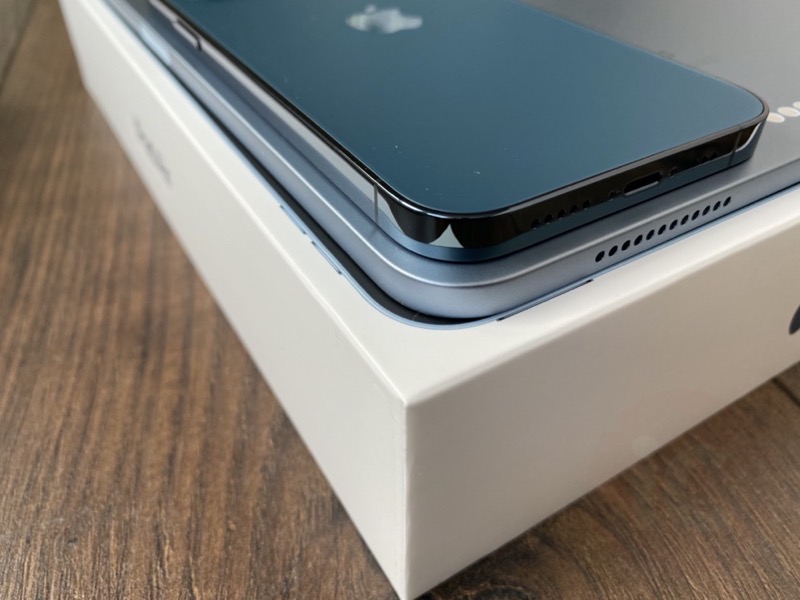 The 2020 iPad Air is very thin—just slightly thinner than the iPhone 12 Pro: 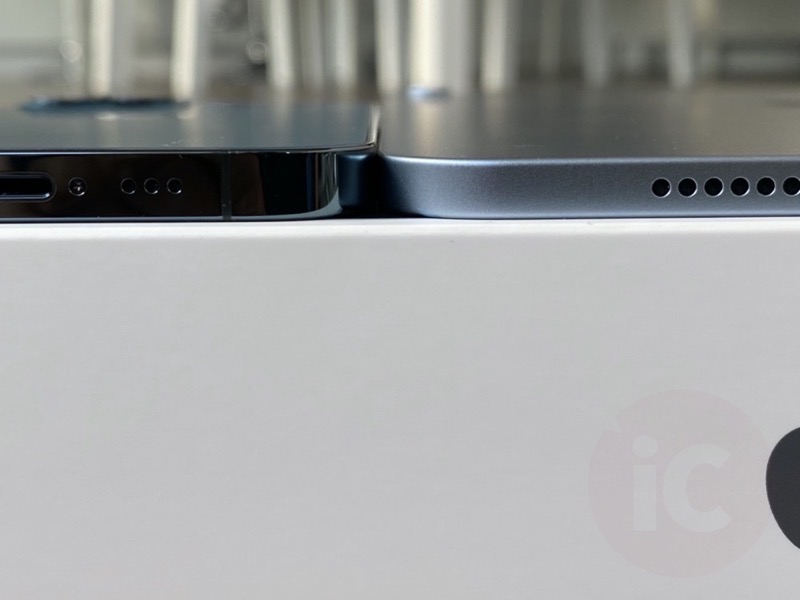 The new design with flat sides is really great. The iPad Air fits nicely in my hand. The camera bump is huge. A14 Bionic makes everything very snappy and with support for Apple Pencil (2nd generation and its magnetic snap) and Magic Keyboard, this iPad Air is the one to buy, folks. You get some extra colour schemes such as Green and Sky Blue, to differentiate your iPad from others.

The iPad Air (2020) looks to fill the sweet spot between the regular iPad and an iPad Pro—and I think it works. Apple will make you spend money one way or another and I think you should spend more on the iPad Air just for Touch ID alone (and A14 Bionic, 2nd gen Apple Pencil, True Tone; no ProMotion as expected).

The stereo speakers sound great, while we didn’t get a chance to test the camera, because wedding season is over (front row with an iPad, people).

Apple only offers two storage options with iPad Air: 64GB and 256GB. It would have been nice to see 128GB as the minimum storage, but alas, this is Apple here. 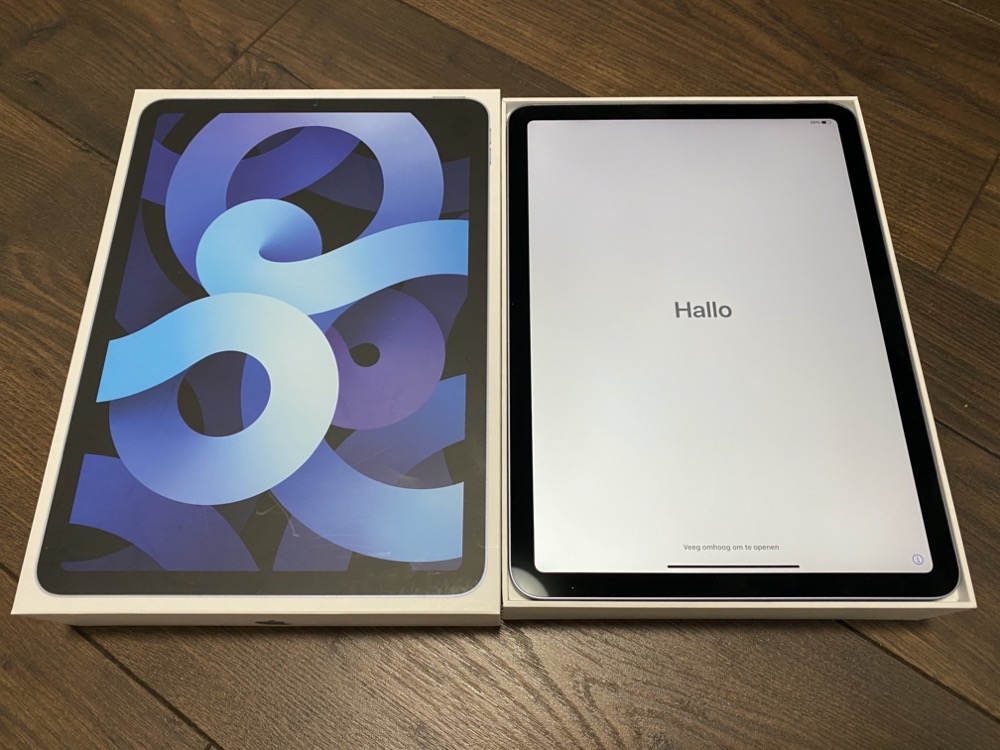 Again, iPad Air is a $350 premium over an entry 10.2-inch iPad, but if you have the extra cash to spend and can’t splurge on an iPad Pro, this is the next best thing. You’ll appreciate the newer design and colours, faster speed, True Tone and P3 laminated display, better implementation of Touch ID, 2nd-gen Apple Pencil support, 12MP camera with 4K recording, to go with Wi-Fi 6 support.

Click here to buy the 2020 iPad Air on Apple.ca, starting at $779 in Canada. If you want to save a few bucks, wait 3-6 months for these to hopefully hit the Apple refurbished store.