Since the introduction of iPhone firmware 2.0, we learned to love (or loathe) the infamous iPhone App Store, our gateway to almost 10,000 apps created by developers. Of course, for those with jailbroken iPhones your “other” App Store is none other than Cydia.

Just yesterday Apple released a list of Top iPhone Apps of 2008 (don’t forget to check out our Top 5 App Store Apps List) and they are listed in the following “Top” categories: Overall, Games, Entertainment, Utilities, Social Networking, and Music. Each category is differentiated between free and paid apps.

What’s the purpose of this list? Well, it’s a fantastic way for you to catch up on downloading those “must have” apps that you haven’t discovered yet. With the rate of Apps being released into the App Store everyday it can be difficult to keep track of them all. Take a look at the following pictures to see the Top iPhone Apps of 2008: 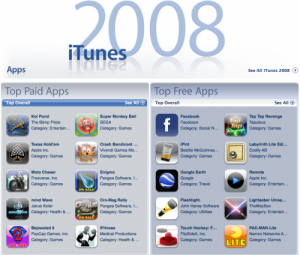 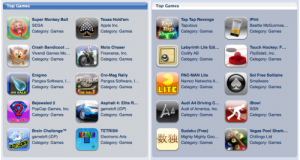 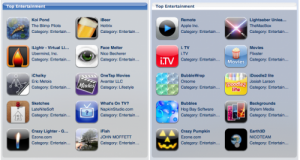 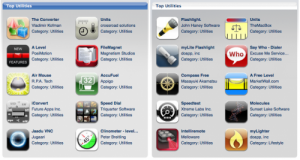 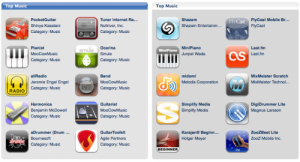 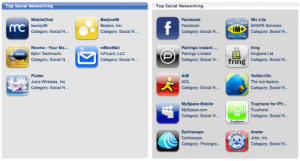 I would add the Google Mobile App (the coveted voice feature) Twittelator, and Twinkle to the list. What apps are you using that aren’t on the list, but you’d highly recommend?

Thanks to iClarified for the screenshots.

It looks like Apple has now allowed developers to issue promo copies of their iPhone apps. Developers are allowed to issue 50 free promo codes once their app has been accepted into the App Store. This method will be much easier for developers to promote their apps or ask blogs (such as ours) for reviews. Currently it’s only limited to US iTunes users only though.

Previously developers have had to email out ad-hoc distributions for reviewers to install manually but this new method is going to be a nice addition for everyone. Once it’s available for Canadian iTunes users, calling all developers out there to contact us for some app reviews!