It seems as though my iPhone battery life is decreasing and is worse off than it was before. Why? That’s because I’ve been hooked on Twitter for the past little while. That means battery usage decreases when my iPhone usage increases. It’s pretty simple.

What makes Twitter so “addicting” you ask? Well, if you’re a current events junkie you will always find the latest right on Twitter. Remember when that plane crash landed on the Hudson River in New York? The picture online was posted to Twitter–now that’s what you call citizen journalism at work!

A new iPhone app has been released to help you get even more addicted to Twitter. It’s called Retweet. What does Retweet do? It aggregates all the popular “retweets” (in other words, tweets being forwarded by others on Twitter) in one place so you can find out what’s hot at the moment.

Retweet iPhone App: Free for the Next 24 Hours Only!

The Retweet iPhone app is currently free but only for the next 24 hours (normally it’s $0.99). It’s a well designed app that is worth checking out if you want to get the latest breaking news/info via Twitter. 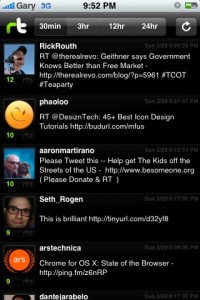 Some features at the moment include a built in web browser and the ability to retweet the top retweets. Popular retweets are organized in 30 minute, 3 hour, 12 hour, and 24 hour increments. I found out about Retweet when someone I was following retweet’d it. Jeez, I think I’ve said retweet one too many times. 😉 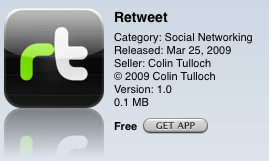 Click here to download it for free until March 30, 8PM PST. This is a great opportunity to try it out while it’s free! It’ll go great hand in hand with either Tweetie or TwitterFon! Let me know what you think of Retweet!