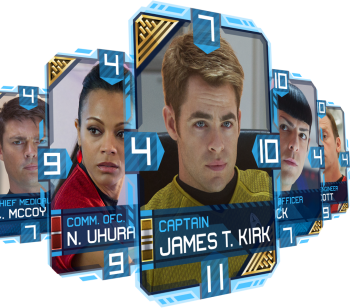 The latest movie in the new Star Trek franchise – Star Trek Into Darkness – goes on sale on Blu-Ray and DVD in a couple of weeks. If you can’t wait, you can buy it now through iTunes. So I thought this would be a perfect time to review a Star Trek app I’ve been addicted to for the past couple of weeks – Star Trek Rivals.

It’s a digital collectible card game for your iOS devices that features characters, ships and other stuff from the first two Star Trek movies. Here’s my video review for Star Trek Rivals.

When you start the game you’ll be given 30 random cards. Each time you play you’ll need five cards. The cards themselves have a number along each side. The higher the number the stronger that side is. If you’re a gamer, you might recognize this from the card game Triple Triad within Final Fantasy VIII.

As you play, you and your opponent will take turns placing cards on the 3×3 table. If a card is placed adjacent to an opponent’s card with a lower numbered side, that card will become yours. This can lead to a bunch of combos. Each time a card switches sides, any opponent’s adjacent card with a lower number will also become yours. This can help even out the playing field if you’re playing someone who obviously has much better cards than yourself.

You keep taking turns placing cards until the board is full. The winner is determined by who has control of the most cards on the board. Each time you play you’ll gain experience and credits, win or lose. So there is no penalty for losing a match, but you do get more if you win. As you gain experience you’ll level up. Doing so provides you with Latinum and a chance to buy a more powerful card at a reduced price. 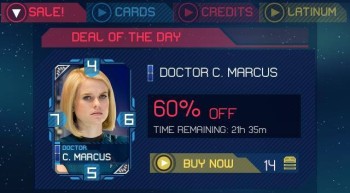 Other ways to get better cards are to buy them individually. This is very expensive as the cards range in price from 3 to 800 Latinum. A cheaper way is to buy crad packs. Each pack contains either 5 or 10 cards, and the chances of getting the more powerful cards increases as you spend more. This doesn’t mean you can’t get the stronger cards in the cheaper packs, it’s just more rare.

Every 24 hours there’s also a Deal of the Day. Again, you can buy better cards for up to 75% off their original price. And if you log in every day, you can choose to get a free card, or take a chance and maybe improve the card you’ll be offered the next day. But be careful with this. Eventually you’ll be forced to take the free card being offered, and it may not be as good as one that was offered previously. 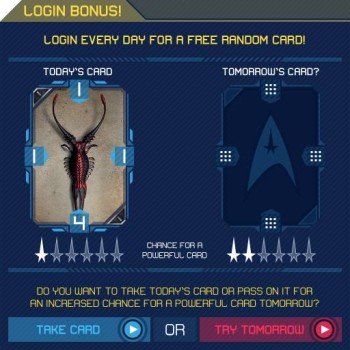 Of course, as a fremium game, you can spend real money to buy Latinum and Credits to get you those power cards a lot faster.

There are several different ways to play Star Trek Rivals. You can play against random people playing at the same time as you. There are two choices within this gameplay. Impulse Power games can last more than 36 hours but you can have as many games going as you want at one time as long as you have enough cards. The downfall of this way of playing is, well it can take a long time to finish a game. If after 36 hours your opponent hasn’t played a card, you can claim victory. The problem is, until then your cards are tied up in that game with no way to force quit.

In Warp Speed your opponent has an hour time limit to play a card. I find most people who play this way tend to play quickly. Very rarely do you get to claim victory because your opponent hasn’t played a card in an hour. The downside to playing this way is you can only have 5 games going at once.

You can also play against friends. Each person has their own unique friend code. So you can share it with whomever you want and just play against them. If you want to add me as a friend, my code is NIDJUU. I’d love to play against some of you.

While this is a digital collectible card game, I’m not sure you’ll want to try to collect all the cards. When you start a match your five card hand is randomized from all the cards you have. So if you have all the cards there’s a good chance you’ll have decks with weaker cards. My strategy has been to sell off weaker cards as I get stronger ones. Of course you can also upgrade your weaker cards. To do so you’ll need a certain number of copies of the card and then have to spend credits.

Overall, Star Trek Rivals is a lot of fun. It’s no where near as complex as something like Magic the Gathering, but it does have a lot of replay value. It can be frustrating when you start because it feels as though everyone has better cards than you. But with a little strategy and use of the combos, you can defeat just about anyone. Plus, every time you play you gain credits, thus being able to buy packs of cards and get better ones.

Let me know what you think of Star Trek Rivals, and let me know if you enjoy collectible card games. If so which ones. And again, don’t forget to add me as a friend. My friend code is NIDJUU.