A while back there was much hype regarding ‘augmented reality’ on the iPhone and other smartphones. Well, it seems like we now have some live apps demonstrating this. One of our favourites, Urbanspoon has now been updated to include a new ‘augmented reality’ Scope view.

Urbanspoon Can Now Scope Out Your Neighbourhood for Good Eats

This new Scope view in Urbanspoon utilizes the camera, compass, and GPS on your iPhone. In other words, it will only work on an iPhone 3GS and you must be running 3.1 firmware. The Scope view is pretty neat. All you have to do is point your camera in any direction and a list of restaurants will pop up.

Sometimes the compass is off so it might take some calibrating, but on the whole I was able to find restaurants near me and even when I was out and about. Pretty cool stuff! Restaurants appear as dark circles with their Urbanspoon rating. So you can definitely have some fun with this application on your 3GS. Here are a couple screenshots: 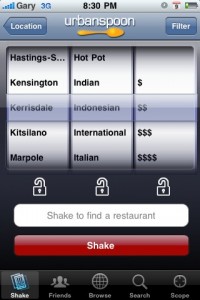 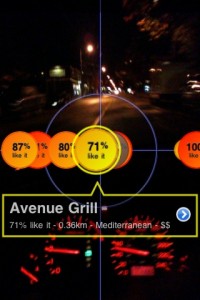 This whole augmented reality craze is awesome. Two other worthy apps (that are FREE) to check out are Wikitude (which was an Android app, now for iPhone) and Layar Reality Browser. Both take your iPhone to another level for exploring your city.

This latest Urbanspoon update definitely makes it fun and interesting for exploring new restaurants on your iPhone. Anyone else out there using Scope view on Urbanspoon? How do you like it so far?