Update Nov. 19, 2018: Shaw has confirmed it will launch Freedom Mobile in Victoria and Nanaimo on Vancouver Island in 2019, along with other cities across Canada.

Shaw’s Freedom Mobile seeks to expand its network on Vancouver Island in British Columbia, as it has proposed eight cell towers in the Comox Valley, on top of hoping to launch service soon in the provincial capital of Victoria, reports the Comox Valley Record.

At the Comox Valley Regional District’s Electoral Area Services Committee meeting held yesterday, Freedom Mobile representatives explained they wanted to launch in the Comox Valley and other markets in the province “as soon as possible”. 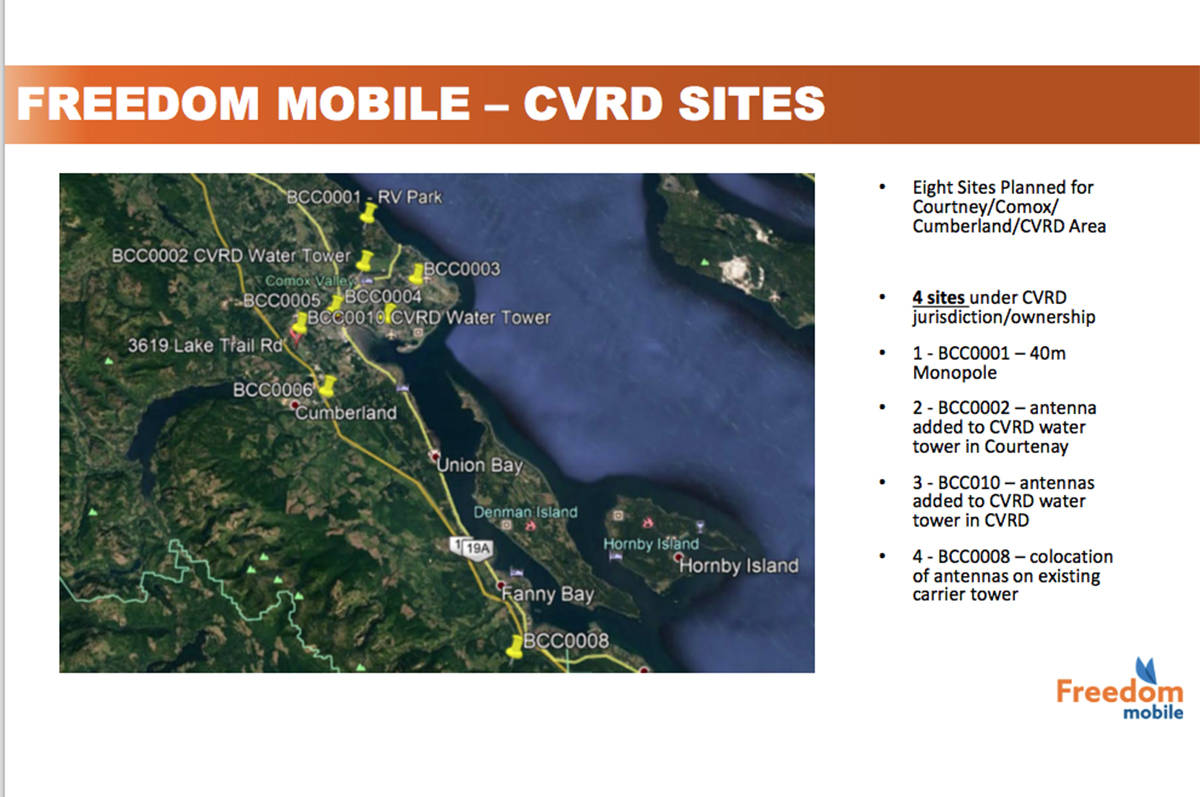 Chad Marlatt spoke as an agent on behalf of Freedom Mobile and said discussions have been positive so far, saying “We’re hoping to launch as soon as possible in this market,” adding “Sooner will be the Victoria market, and they’ll be expanding into other tier-two markets across B.C. as well.”

Last year, Marlatt helped Freedom Mobile gain approval for eight cell towers in Chilliwack, in the B.C. Lower Mainland, where at the time he claimed the company’s prices were “probably” 50% lower than incumbent wireless carriers.

Freedom Mobile’s network currently services larger cities in Canada, including Toronto, Hamilton, Vancouver, Calgary, Edmonton, and Ottawa, but wants to expand to smaller regions as well, such as the Comox Valley on Vancouver Island.

The Shaw subsidiary proposed eight towers by utilizing existing infrastructure and cell service sites in the Comox Valley, instead of building new ones. Examples included adding antennas onto both CVRD water towers, while also setting up “colocations” on rival towers, such as existing ones from Rogers.

“Where possible, we’ll use existing infrastructure. There are instances where we’ll need to build our own infrastructure,” Marlatt told the committee. New towers would be 40-metre high “monopoles”, located in secluded, wooded areas, at least 300 metres away from homes.

Freedom Mobile’s western regional manager for real estate and municipal affairs, Erica Rigik, said the company wants to build towers out of plain view, saying “It’s in our mutual interest to be as invisible as possible, although this kind of service and the kind of affordability our network offers… comes with incremental infrastructure.”

Area A director Bruce Jolliffe supported the proposal to use existing sites, noting “That’s what we prefer around here,” as did Area B director Rod Nichol, however the latter did note the proposed site for Seal Bay RV Park would require consultation with First Nations.

Freedom Mobile representatives told the committee it would next move forward with a public consultation process, as mandated by the federal government, before reporting back to the CVRD.

Shaw’s wireless divisions has been planning to expand on Vancouver Island for a while now. Last fall, Freedom Mobile gained blessing from Sooke City Council for its tower in the Western Communities, while earlier this year, the company relocated its Windsor call centre to Victoria, despite union protests.