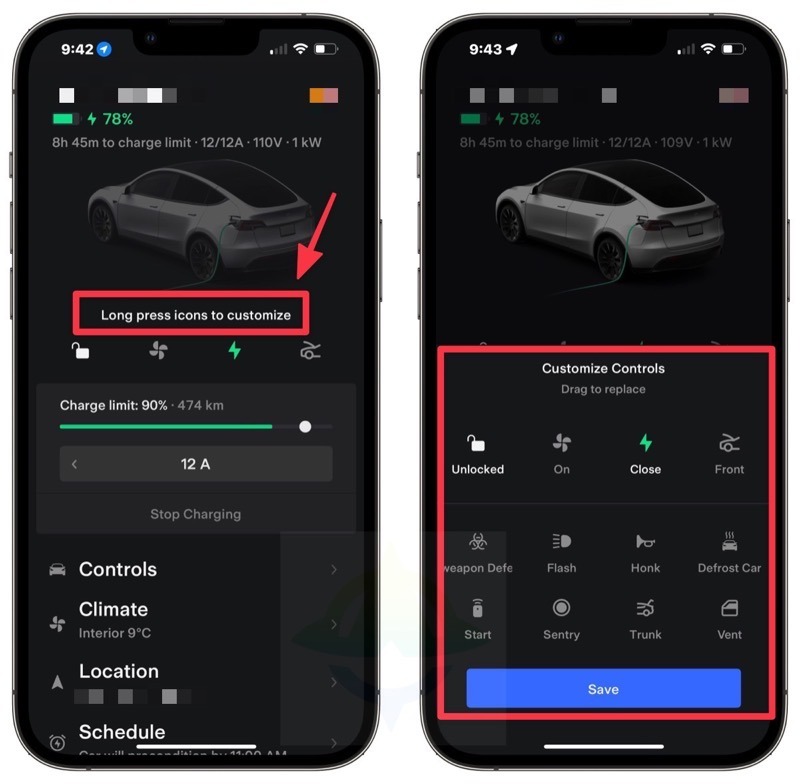 As reported by the folks over at Tesla North, the Tesla app for iOS and Android has been updated to version 4.3. The update brings the following new features/improvements:

The quick controls Tesla added to the app in version 4.0 can now be personalized, with a number of replacement options available. On iOS, you’ll see a message that reads, “Long press icons to customize,” atop the quick controls when you open the Tesla app for the first time after updating.

Upon long-pressing the quick controls, a menu will pop up with a number of additional quick control options, including:

Drag and drop the option you want over to an existing quick control, and it will be replaced. Once you’re happy with your configuration, tap on Save. If you’re using a Tesla app widget, the change will also be reflected in the quick controls there.

The update also includes a pretty big new feature for Tesla owners in China. According to @42how_, version 4.3 of the Tesla app adds the ability to unlock Supercharger floor locks.

Some Supercharger locations in China are fitted with floor locks that prevent non-Tesla vehicles from parking in Supercharging spots, and the update will let Tesla owners disable these contraptions right from the Tesla app.

Check out how the new feature works in the video below:

How to use the Tesla App to open the floor lock of a Tesla Supercharger station, Check out the video to learn about the new features! @elonmusk @Tesla#TeslaChina $TSLA pic.twitter.com/2BjVmU2n1g

According to @Tesla_App_iOS‘s datamining of the update, other additions include gift cards that can be purchased right from the app, as well as new energy gateway info. Check out the thread linked below for more information:

Bonjour, here is your unroll: Version 4.3.0 has been de-compiled and here's what we've found: -Gift… https://t.co/qe6LMamLYX See you soon. 🤖

Update to version 4.3 of the Tesla app if you haven’t already, and let us know what you think of it in the comments below.