Tesla is seeing huge demand for its vehicles and on Tuesday, increased the price of its Model 3 line up and Model Y in Canada, reports Tesla North.

But this latest price hike sends the entry Model 3 over the $55,000 CAD iZEV rebate limit, so that means it no longer will qualify.

The federal government updated its website at 5pm on Tuesday, indicating the change.

“As of November 23, 2021 at 17:00 Pacific Standard Time, the following makes and models of vehicles are no longer eligible for iZEV Program incentives,” detailed a note on the iZEV program webpage, listing the following Model 3 variants:

“All eligible consumers who ordered one of these vehicles prior to this date will still receive the iZEV Program incentive (subject to funding availability),” says the federal government. 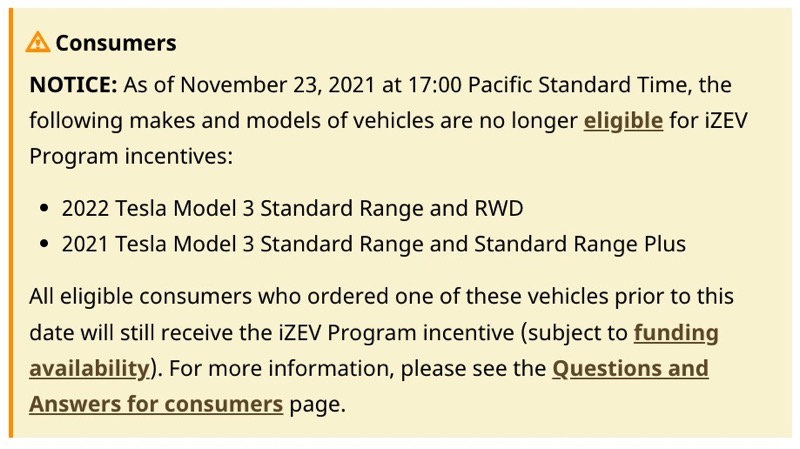 In British Columbia, the province’s $3,000 rebate for the Tesla Model 3 is no longer listed on the updated CleanBC Go Electric Eligible Vehicle List, which was updated on November 23, 2021.

According to Tesla, the only provinces and territories that offer rebates as of November 24, 2021, include:

Rebates dropped from the Model 3:

So overnight, the Model 3 was dropped from both the federal rebate, and provincial rebates in B.C., New Brunswick, Nova Scotia and the Yukon. Including the price increases on Model 3 vehicles, that’s over a $13,000 price jump overnight.

Check out the price increases for the Model 3 and Model Y below:

Tesla is seeing unprecedented demand for its vehicles, amid a global semiconductor shortage and also parts supply chain pressures.