The highly-anticipated Tesla Model Y crossover SUV has been spotted on the streets of the company’s hometown, Palo Alto, California.

Motoring magazine icon MotorTrend got its hands on a lot of photos of a black prototype Tesla Model Y being tested on California roads. It claims the images were taken by a “sharp-eyed neighbor” in the vicinity of Tesla’s Palo Alto, California HQ.

What the series of photos show is this black, non-glossy test vehicle with two men in front (presumably Tesla engineers). One of these guys is driving (naturally) while the other looks down at what’s probably a laptop.

The car looks essentially like a taller Model 3; it’s likely the two will share some body panels and componentry. The rear diffuser, however, seems to be of a new design compared to what was shown at launch. Those aerodynamic wheels aren’t an option on the online configurator. Visible against the black paint is a Dual Motor badge on the trunk. Judging by the absence of the Performance model’s red brake calipers, we’d guess this is a tester for the Long Range AWD version, rated at 280 miles per charge. Also noteworthy is the presence of black door handles, in contrast to the Model 3’s chrome units—a subtle, yet appreciable, design differentiator. 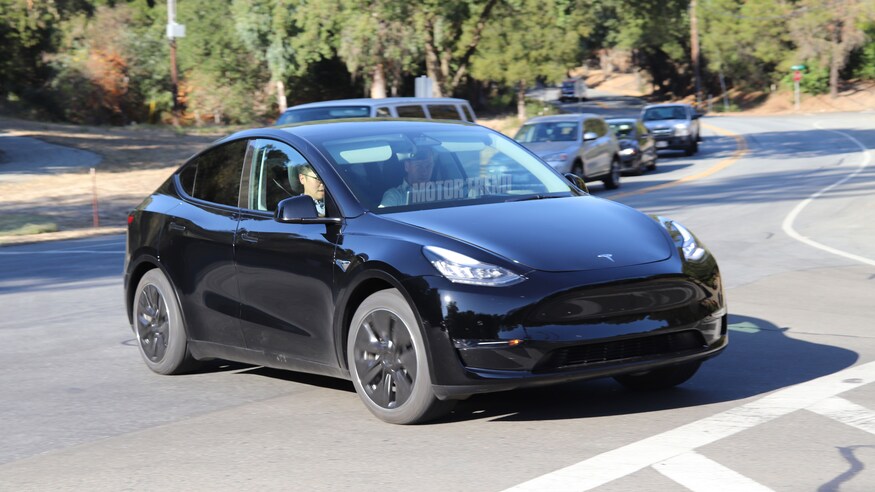 “It has the functionality of an SUV, but it will ride like a sports car,” said CEO Elon Musk in May. “So this thing will be really tight on corners.”

Testing the electric car on public roads means that Musk’s company has entered the final stage of the Model Y preparation before mass production begins.

For Canada, a recent price adjustment for the Model Y saw prices increase by $3,290 CAD, but it now includes Autopilot and freight and PDI, now starting at $66,290 CAD for the RWD Long Range configuration.