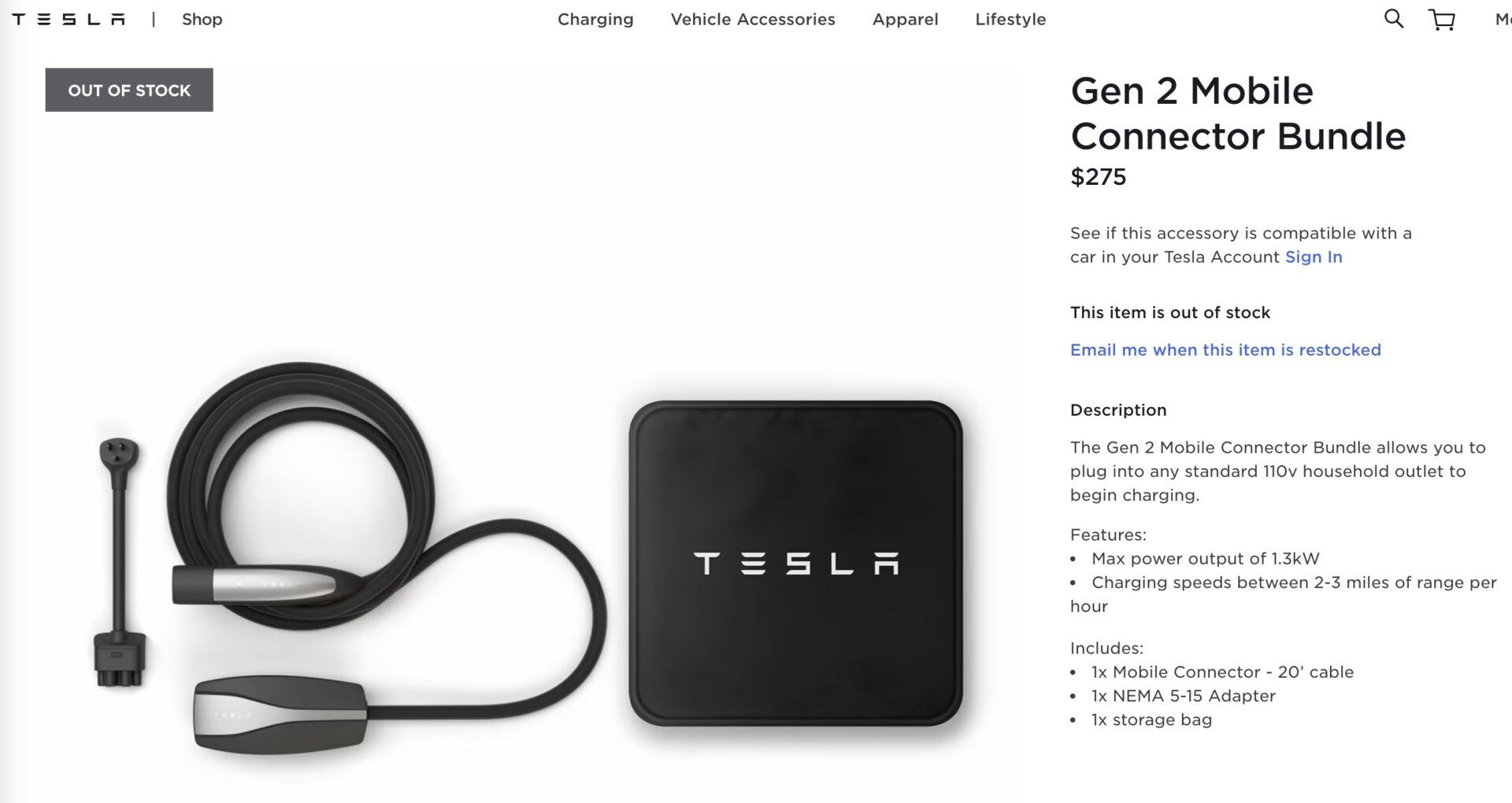 Tesla just updated the website. The mobile connector is no longer included with a new car. They now list a price for the connector rather than saying "comes with vehicle".

Guessed correctly what the change in the configurator means. https://t.co/IieebFQLUu pic.twitter.com/MBWfUzsdGv

The change was first spotted by Tesla enthusiast @tesla_adri. Company CEO Elon Musk confirmed the removal in a response to @WholeMarsBlog on Twitter, saying it was due to “super low” usage statistics.

Usage statistics were super low, so seemed wasteful. On the (minor) plus side, we will be including more plug adapters with the mobile connector kit.

Tesla’s Gen 2 Corded Mobile Connector used to come included with every EV you bought from the company and allowed users to charge their cars at 2-3 miles of range per hour (about 5km/hr).

Instead, Tesla will now sell the Gen 2 Mobile Connector Bundle separately for $275 USD. Musk noted that the Connector will now come with additional plug adapters since it is being sold separately.

At the time of writing, the Gen 2 Corded Mobile Connector is out of stock at Tesla’s online store.

The decision eerily resembles Apple’s removal of the included AC charging adapter from the iPhone back in 2020. Musk even pulled out the environmental waste card like Apple, calling the included Corded Mobile Connector “wasteful” because of its low usage.

What’s next, Tesla? A center console display with a notch?

Tesla may have also removed the Corded Mobile Connector because of supply chain constraints, which are circling not just automakers and tech companies but other industries as well.

Regardless of whether the move was influenced by low usage statistics or supply shortages, Tesla owners and enthusiasts say the company should either reverse the decision or at least offer the connector as an optional, free add-on in its vehicle configurator.

Please reverse this decision. Mobile connector is a basic piece of equipment for every and any electric vehicle and one of the main advantages of having one, ie: you can charge anywhere.

You should offer it for free for those who need it if you’re not going to reduce the cost of the car. It’s the right thing to do

Tesla’s Gen 2 Mobile Connector Bundle charges the company’s EVs quickly enough to tide new owners over until they get a dedicated, higher-powered Tesla Wall Connector installed (which alone can cost hundreds to thousands of dollars to put in).

They’re also an absolute necessity in regions with lacklustre charging infrastructure. Plus, a Mobile Connector is like a tire jack for most people — you don’t need one until you do.

The removal appears to be global, but it is currently unclear if it only applies to new purchases moving forward or if the Corded Mobile Connector will be pulled from orders awaiting delivery as well.

In a later update, Musk announced Saturday evening that Tesla will drop the price of the Corded Mobile Connector to $200 USD, following significant pushback against the charger’s removal from new orders. It’s unclear what the cut-off date is for existing orders to get the mobile charger included.

Musk said customers should install a $600 CAD Wall Connector before their new Tesla arrives, but this option includes extra electrician costs for the installation.

Based on feedback received, we will drop mobile connector price to $200 & make it easy to order with car.

Note, mobile connector is not needed if you have a Tesla wall connector or to use Superchargers.