For those waiting on fence and thinking about whether or not to buy an iPhone 3G, good news is around the corner. As you may have already heard, the iPhone Dev Team has already jailbreaked the iPhone 3G and will be releasing their Pwnage tool later this week.

What does this mean to everyday consumers? Jailbreaking means you will be allowed to install non-Apple software on your iPhone. Installer will be making a comeback it seems! 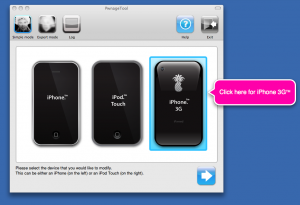 Check out the video of the world’s first jailbreaked iPhone 3G:

Also, the world’s first unlocked iPhone 3G has been accomplished by folks in Brazil. How? They have used a wafer thin chip that “tricks” the SIM card into thinking it’s a test card. Then, voila! Your iPhone 3G is unlocked. Check this video for more (it’s not in English…anyone care to translate?):

The cat and mouse game between Apple and the iPhone community seems to be in full swing, yet again. If you recall, I unlocked my first generation iPhone myself on 1.1.1 firmware, and then eventually upgraded from 1.1.1 to 1.1.4.

One of the benefits of buying a Rogers iPhone 3G is that when new firmware updates are released by Apple, you can just update in iTunes instead of doing the whole jailbreak/activate/unlock thing. Unlocking the iPhone was a lot of fun and challenging at time, but it can be nerve wracking if it’s your first time!

iPhone 3G Battery Update
So it seems like my iPhone 3G’s battery is messed up. I thought maybe it was just a bad day yesterday, but today confirmed that my battery seems to have a mind of its own. After 8 hours of standby and 3 hours of light usage, the “20% battery remaining” pop up appeared! So I called Rogers iPhone 3G customer care, explained my situation (which the guy didn’t want to believe) and finally convinced the CSR that something was wrong.

Long story short, they are sending me a new replacement 8GB iPhone 3G via courier, and it should be here by the end of the week (fingers crossed). How is battery life coming along for all you iPhone 3G owners? Anyone with similar issues?