iOS developer Brad Larson has taken heart rate data from the Apple Watch and compared it to a dedicated Mio Alpha heart rate monitor he also had on during a run.

Larson was able to compare the data as he made a quick iPhone app “that ran a query for all recent samples and generated CSV output from that,” which we see in the chart below: 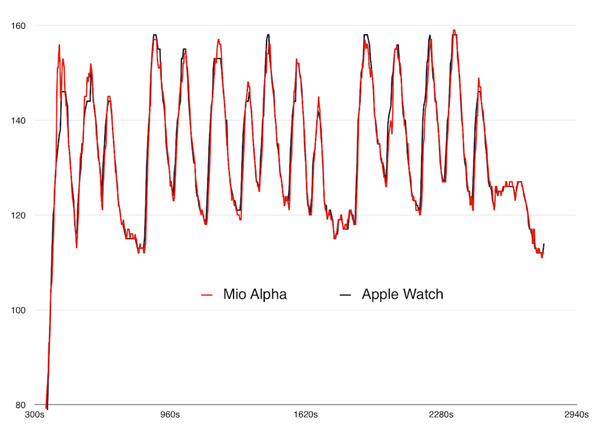 The Mio Alpha data is shown in red, whereas the Apple Watch heart rate data is in black. Essentially, Apple Watch performs exactly like a dedicated heart rate monitor (which costs $169) with very accurate results, by using photoplethysmography:

The heart rate sensor in Apple Watch uses what is known as photoplethysmography. This technology, while difficult to pronounce, is based on a very simple fact: Blood is red because it reflects red light and absorbs green light. Apple Watch uses green LED lights paired with light?sensitive photodiodes to detect the amount of blood flowing through your wrist at any given moment. When your heart beats, the blood flow in your wrist — and the green light absorption — is greater. Between beats, it’s less. By flashing its LED lights hundreds of times per second, Apple Watch can calculate the number of times the heart beats each minute — your heart rate.

(well, that is if you don’t have tattoos on your wrists)

How are you liking your Apple Watch for monitoring your heart rate so far?