10 Quick Tips to Maximize your Google Maps for iOS Experience

Google has shared some quick tips for newbies trying out Google Maps for the iPhone. The app looks great but some of the gestures take some discovering to figure out. One of the best features about the app is how the swiping up on info sheets include Street View previews and relevant search info for businesses such as telephone numbers and hours.

This spiffy page from Google shares some quick tips that everyone should know about, with screenshots and some animations. 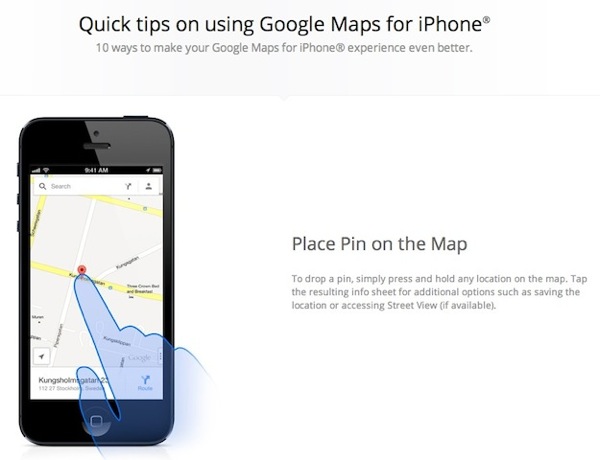 Google Maps for iOS exceeded 10 million downloads in less than 48 hours after its launch and some reports note it has caused a spike in iOS 6 upgrades. Walt Mossberg from the WSJ noted he felt Google Maps for the iPhone was better than the current mapping experience on Android phones.

Are you using Google Maps for the iPhone? I can’t keep my hands off of this app.