Doug Crossan, a police officer in UK, has reported his 13-year-old son for fraud after Apple refused to refund the £3,700 (roughly $5,630) the child has spent while playing freemium apps on his iPad, according to The Telegraph. 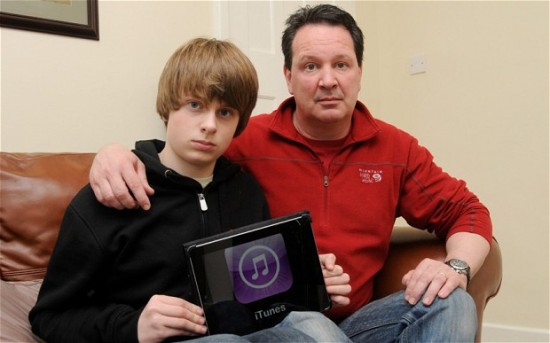 The story is slightly similar to what we’ve reported earlier, but this time the happy ending is missing.

Cameron Crossan, the police officer’s son, “has “innocently” purchased apps and add-ons over three months from iTunes,” with roughly £77.98 each bill. This went seemingly unobserved by his parents. They were alerted by the Doug Crossan’s credit card company, who called to inform the police officer about the large outstanding balance, which he believed he had paid half a year ago.

The credit card company redirected the father to Apple, but the Cupertino company refused to refund the amount, saying that sales on iTunes are final.

As a final bid to claim his money back, the Crossans have taken the case to the police through the online crime reporting tool, Action Fraudline. This, however, also means his 13-year-old son will be arrested and questioned.

Crossan said: “We have asked Apple to consider our case in the same light, as the case is mirrored by him playing exactly the same free games, but Apple have refused by saying the sale on iTunes is final and no refund.

“Apple iTunes are now refusing to speak to me or give me an idea of why they will not refund. They sent me a copy of the terms and conditions stating that all purchases are final and further contact should be by way of a solicitor.”

“None of us had any knowledge of what was happening as there was no indication in the game that he was being charged for any of the clicks made within the game.”

This case certainly raises the red flag for parents. How do you fend off these types of issues?