Apple Launches Best of April Section in the App Store

As noticed by Federico Viticci of MacStories, Apple has launched a new curated section called Best of April, in which it highlights the best app releases for that month of 2014. The next section is available for iOS but missing from the Mac App Store. 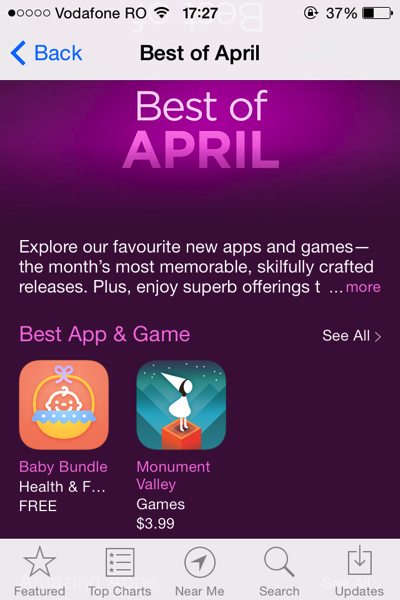 The section contains three categories: Best App & Game, Amazing Apps and Great Games, all of them being hand-picked by Apple’s editorial team, with separate picks for iPhone and the iPad. For the iPhone, for example, Apple selected Baby Bundle and Monument Valley as the Best app & game, while the Amazing apps section includes apps such as Realtor.ca, Impressed Photo Books, Garden Plan Pro, and others.

The third category in the Best of April section is Great Games, which contains apps such as Leo’s Fortune, Hitman Go, Third Eye Crime: Act 1, etc.

As the above list samples show, it is not only apps released in April that get featured in the section, but also those apps that received impressive updates.

The new section suggests that Apple will update the list on a monthly basis, hand-picking a collection of apps that change according to country. The highlighted section also joins the App Store’s other sections such as App of the Week, Editor’s Choice, and the Indie Game Showcase section.