Astrid Tasks Users Can Now Export Lists to Wunderlist [How To] 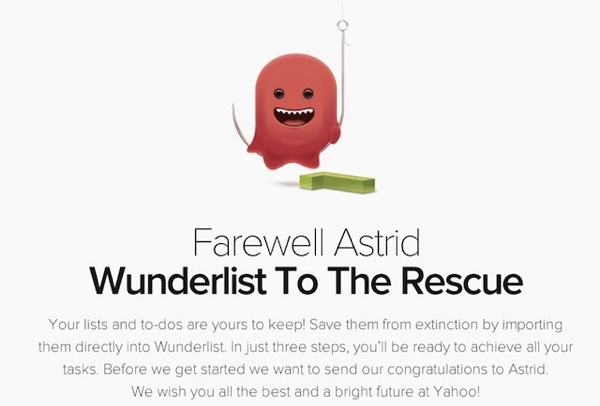 It was less than a week ago Yahoo! announced it had acquired free to-do list Astrid Tasks. The latter said their service would continue working as normal for 90 days. If you have become invested into Astrid Tasks, Wunderlist has announced today a free tool to transfer all of your lists to their app so you can your life can continue to function as normal.

Our engineers dropped everything (well, almost everything!) and created a simple tool to help the Astrid community safely import their tasks into Wunderlist. With weddings to plan and team projects to complete, no one has time for a disruption when it comes to managing personal and professional to-dos.

Here are the three easy steps to transferring over your Astrid data. It’s very simple and we took it for a quick spin and it worked exactly as described.

Step 1: First things first, log into Astrid in order to access all your lists.
Step 2: Transfer all of your to-dos by connecting to Wunderlist or easily creating a new account.
Step 3: We’ll send you an email confirming that all lists have been successfully imported into Wunderlist.

Wunderlist recently launched its premium service, Wunderlist Pro to allow users to assign tasks. Let us know how this export tool works for you!