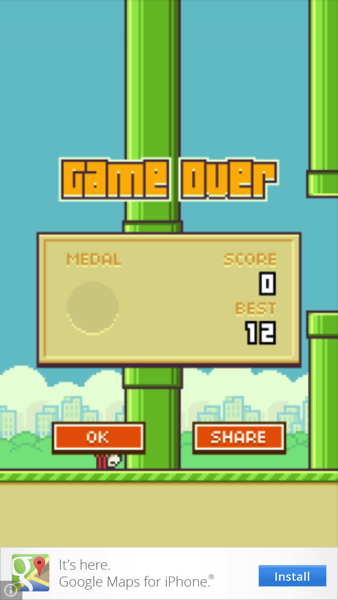 Flappy Bird, the game that suddenly became the world’s most sought-after application, was shot dead. No, it wasn’t its enemies, but its own creator, Don Nguyen, who – after long days spent without Internet – decided to break his silence and explain the short life and death of the heavily pixelated bird that has captured global attention over the past few weeks.

In an exclusive interview with Forbes, Nguyen admitted that he developed the game in just a few days with a simple aim: play it “when you are relaxed”. But in an interesting turn of events, the game released for free on May 24, 2013, with little fanfare by .GEARS, a Vietnam-based developer, became a world hit, ranking as the No. 1 game both in the App Store and Google Play.

The 29-year-old developer has other games in the App Store, such as Super Ball Juggling and Shuriken Block, but these are harmless. Flappy Bird, on the other hand, delighted and engaged players in equal measure. It was an extraordinarily difficult game. In fact, it was so difficult to play that Twitter users flooded social media with their highest score. It became a phenomenon. As Nguyen said: it became addictive.

“Flappy Bird was designed to play in a few minutes when you are relaxed,” says Dong Nguyen, in an exclusive interview, his first since he pulled the plug on the app. “But it happened to become an addictive product. I think it has become a problem. To solve that problem, it’s best to take down Flappy Bird. It’s gone forever.”

And that was exactly the reason why he decided to pull the game from both storefronts.

He says he will continue to develop games. “After the success of Flappy Bird, I feel more confident, and I have freedom to do what I want to do.”

The lucky ones who have already installed the game on their iPhone can play it further. But those who are after the game have two options: either head to eBay and search for an iPhone with Flappy Birds installed or – maybe the less costly option – ask a friend to give you a copy via different tools such as iExplorer.