The app tracking service AppsFire, was the first one to post a perspective look back at the world’s biggest mobile marketplace, the App Store. 2012 was a very busy year (for Apple) with the App Store surpassing the 1 million app submission milestone, the launch of three new iPads (iPad 3, iPad 4 and iPad mini), the launch of the iPhone 5 and iOS 6. 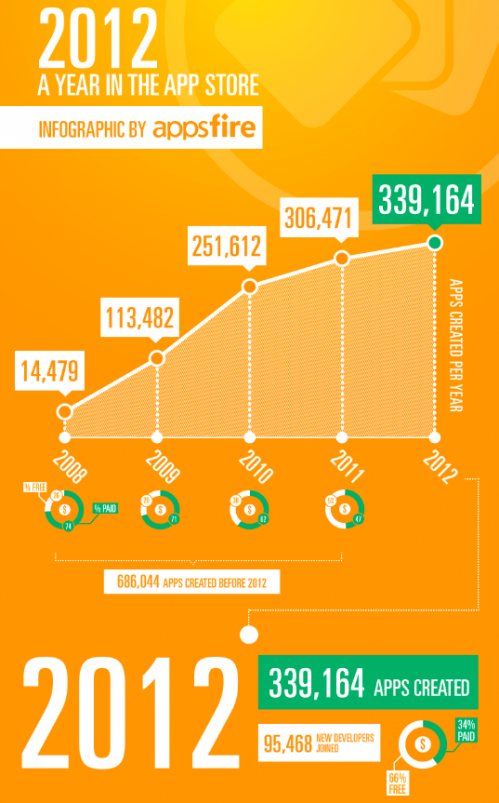 Looking at the very busy app economy, Apple’s ecosystem is performing great, with Apple approving more than 1 million apps in the App Store (although more than 25% of the apps were pulled out of the App Store). However, as the app tracking service noticed, a slowdown on a year-over-year growth could be the sign of a maturing market. This doesn’t mean the App Store is less active, as its user base is growing year-over-year (Apple recently announced that it has 400+ million iOS user base) but the number of new apps is lower than in previous year.

An interesting fact is that while paid apps accounted for 74% of all iPhone apps in 2008, this percentage dropped to 34% in 2012. Likely due to the growing popularity of in-app purchase, which is now part of the developer’s app monetization strategy.

Although there are more than 700,000 iOS app available in the App Store, AppsFire found that only about 1000 apps reached the top ranks in the store this year. The majority of those being games, highlighs once again that there is a lack of a good app discovery strategy. To put that into numbers: only 111,543 apps got traction, while the vast majority of iOS apps, 640,380 got very little traction. This is a sign of the need for a solution in the near future.