Last month Starbucks launched its new Rewards program, while at the same updated their iPhone app to support this revamped program, which now rewards big spenders. Today, a minor update has enhanced the app to better save your device’s battery life and more.

The default setting for Location Services will now be “While Using the App”, which can help save your battery life instead of having the option “Always” enabled. Enabling Location Services is essential for the app to function, specifically if you’re going to use the excellent Mobile Order & Pay feature, which expanded Canada-wide in March.

The company says there are also some new fun animations with your stars, while some other fixes to the app’s dashboard and history.

We noticed a slight menu tweak when the app asks you to redeem a reward, as it no longer uses the iOS pop-up menu text, but rather the app’s own design, which looks much cleaner: 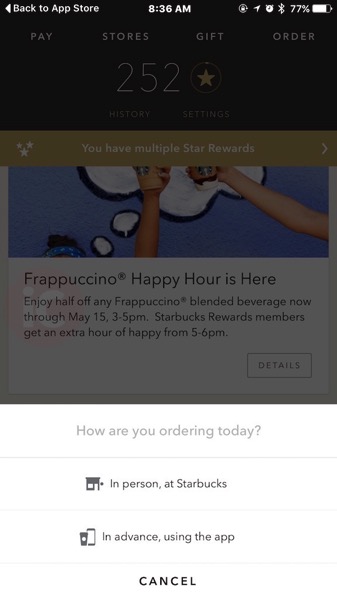 Last month, Starbucks told us there are now 1.2 million active app users in Canada, making it one of the most popular apps in the country.