Apple has the best supply chain management, according to Gartner’s annual Supply Chain Top 25 list. This year Gartner celebrates its tenth annual list, and Apple has taken the No. 1 spot for the past seven years, the market research company emphasizes.

Apple took the top spot, outpacing every other member of the list by a wide margin on the composite of financial and opinion measures. McDonald’s ranked no. 2 for the second time in a row, while Amazon grabbed third spot.

The top five-ranked organizations in 2014 include four that topped the list last year — Apple, McDonald’s, Amazon and Unilever — plus another familiar leader, P&G. Two new companies joined the Top 25 this year with Seagate Technology (No. 20) appearing for the first time and Kimberly-Clark (No. 21) re-emerging after a year’s hiatus.

What the Gartner Supply Chain Top 25 list emphasizes is that these players are taking the customer needs and behaviours as the starting point for go-to-market and operational support strategies. Apple, for example, presents elegant solutions to its customers, but these solutions are driven by a conscious supply chain orchestration behind the scenes, resulting in a high-quality customer experience, Gartner highlights. 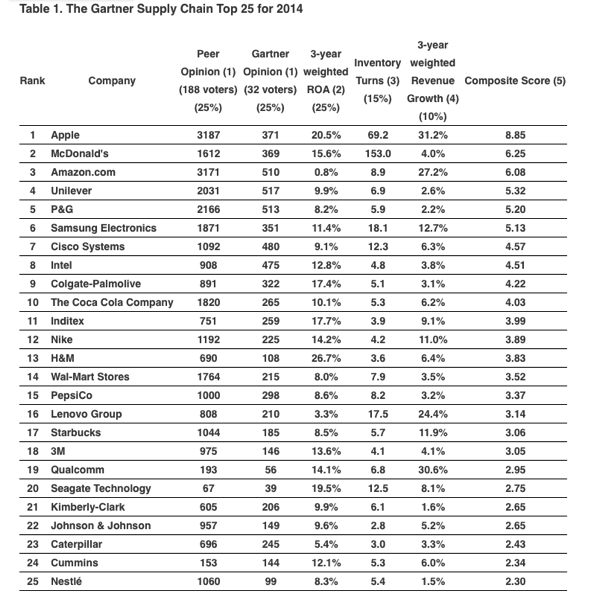