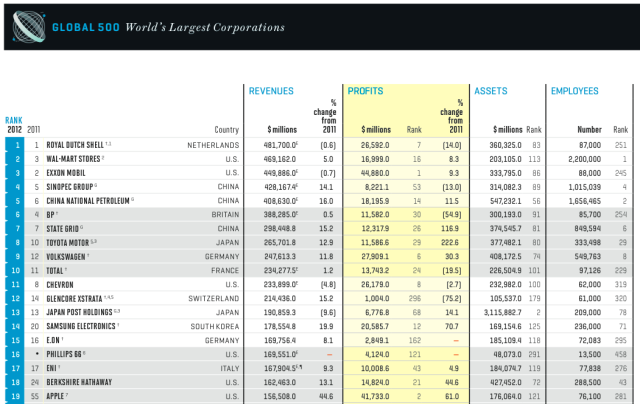 Fortune has published its annual Fortune 500, with Apple moving up 36 spots to rank No. 19. But there is much more: as the Fortune list highlights, Apple ranks as the second-most profitable company in the world after to Exxon Mobile.

Here is what the Fortune says about Apple:

Apple is bigger than ever — cracking the Fortune 10 for the first time and moving up 36 spots in the Global 500. The company has done anything but slow down. The introductions of the iPhone 5 and a the 7-inch iPad Mini helped propel the tech giant’s revenues up from $108 billion in 2011 to $157 billion last year. In a surprising move, Apple reportedly may shift some of its manufacturing from long-standing Taiwanese partner Foxconn to Pegatron, a smaller competitor, in an effort to balance out its supply chain.