Apple grabbed the No. 1 US smartphone manufacturer position with 37.8% during the three-month average period ending January 2013, while Android maintained its lead as the No. 1 smartphone platform with 52.3% platform market share, comScore’s recent report reveals. 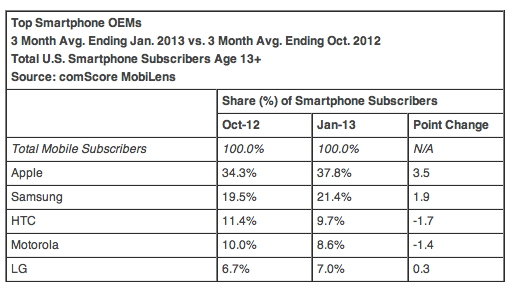 Measuring smartphone adoption, comScore has found that it currently stands at 55% (lower than the Canadian 62%) up 7% since October. Apple’s iPhone was the most sought after device, which pushed the company’s market share up by 3.5% since October, while Samsung grabbed second spot with a 21.4% share of the market. The two leaders are followed by HTC (9.7%), Motorola 8.6%, and LG (7%).

The picture looks different when measuring the smartphone platform market share, but there aren’t any major changes. Google’s Android continued its lead, although it fell 1.3% from October to 52.3% in January, while Apple’s iOS rose 3.5%, reaching 37.8%. BlackBerry also recorded a drop in its market share, falling 1.9% compared to October last year.