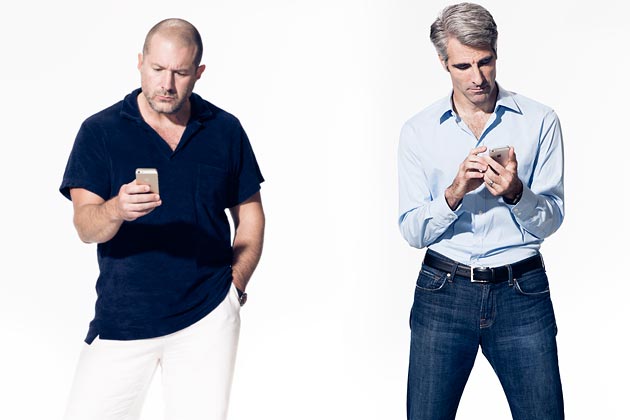 September was a very busy month for Apple: the introduction of the two new iPhone models, the 5s and 5c, iOS 7 and then the — for some analysts, worrisome — 9 million first weekend handset sales. Tim Cook already has shared his thoughts about iOS 7 and iPhones. Now it is the time for Apple SVP of Software Engineering Craig Federighi and SVP of Design Jonathan Ive to speak up, with the help of a BusinessWeek interview, about the creative process that resulted in such hot products that triggered long lines in front of the stores around the globe.

As Federighi points out, one of the key elements of the success was the close collaboration between ID (Industrial Design) and HI (Human Interface), along with Engineering. Their intense relationship helped the creation of iOS 7.

Turns out, iOS 7’s flat design and escape from skeuomorphism was a natural step forward as Apple has become aware where its users currently are.

Federighi: I think we understand where our users are in some sense. I think as we looked at iOS 7, we saw some of the physical analogies in the existing user interface that were part of getting people comfortable working on glass, and we understood that people had gotten through that. We didn’t need to use these very literal physical analogies for them to interact with their phones or to interact with the touch screen.

So in that sense, I think there probably was a change from when we first considered what an interface would be like for a touchscreen device to starting iOS 7 and realizing that the world had moved. But at another level, I think if you look at the success of iPhones and iPads, even with near infants—I mean, toddlers operate that product—it’s less a matter of us thinking how you teach someone to use those devices and as much making the animations, making all the affordances such that you don’t have to strictly teach them at all.

The whole interview can be found here, and it’s definitely a must-read.