Does Apple Need to Change Its iPhone Sales Strategy? 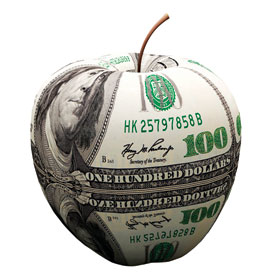 The recent moves in Apple’s stock price as a result of the company’s performance, suggest that investors aren’t exactly satisfied with Apple’s current position on the market. Although the iPhone, iPad and Mac remain the gold standards, the company’s core market seems to have reached saturation, something that investors are afraid of.


In other words, Apple’s strategy which has led the company to its current position, may need some sort of change, and a recent Reuters report states that executives at phone carriers and component suppliers are suggesting there is room for “at least some shift in the balance of power”.

Canadian and US phone companies mostly subsidize handsets in return for two or three (Canada, eh) year contracts, as the possibility of customers paying the full price for an iPhone could drive them away, or at least considering cheaper alternatives.

In other words, while the user pays $179–$200 for the iPhone 5, carriers pay roughly a $400 subsidy for each iPhone they sell, compared to other Android phone subsidies, which usually vary between $250–$300. However, it is worth mentioning here that from Tim Cook’s perspective this is a relatively small subsidy, compared with the revenues gained over a three-year contract.

A new strategy was adopted by T-Mobile USA, which will start selling the iPhone without paying a subsidy. This however, suggests that Apple is ready to switch strategy if this means it can reach new customers, just like the rumoured launch of the cheaper iPhone, which also highlights that Apple does have the answer to market demand.

But more interesting is the fact that T-Mobile will likely use its European model to sell the iPhone, which looks like this: You can purchase an iPhone 5 for the full $649 price, but you don’t have to pay the whole amount in full when you sign up for a two year contract. Instead, you’ll be asked to pay for roughly 42% of the device, and rest you can pay in 12 monthly installments.

The only question is will the ‘Big Three’ carriers in Canada adopt this type of strategy. Would this type of transparent monthly-installment payment plan make an iPhone an attractive purchase for you?