The latest Greenpeace report, “Clicking Clean: How Companies Are Creating the Green Internet,” ranks tech giant Apple as the leader paving the right path for the deployment of renewable energy. The iPhone maker is followed by social media giant Facebook, while several others, most notably Amazon, received low rankings in the environmental activist group’s four rating categories (via BusinessInsider).

Apple received three As: for the energy transparency, renewable energy commitment & siting policy, and renewable energy deployment & advocacy categories. It also received a B in the energy efficiency & mitigation category, so its clean energy index currently stands at 100%, according to Greenpeace’s ratings, up from last year’s 15%. Facebook is a distant second with 49%, followed by Google with 48%. 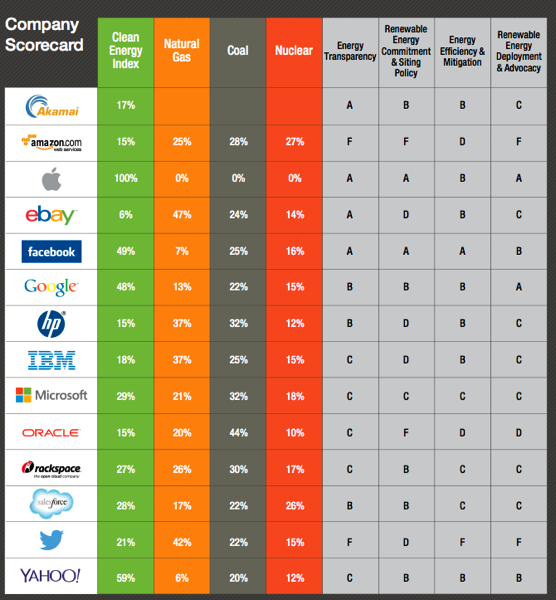 Apple’s aggressive pursuit of its commitment to power the iCloud with 100% renewable energy has given the company the inside track among the IT sector’s leaders in building a green Internet. Apple has made good on its pledge by building the largest privately owned solar farms at its North Carolina data center, working with its utility in Nevada to power its upcoming data center there with solar and geothermal energy, and purchasing wind energy for its Oregon and California data centers. Apple’s commitment to renewable energy has helped set a new bar for the industry, illustrating in very concrete terms that a 100% renewable internet is within its reach, and providing several models of intervention for other companies that want to build a sustainable Internet.