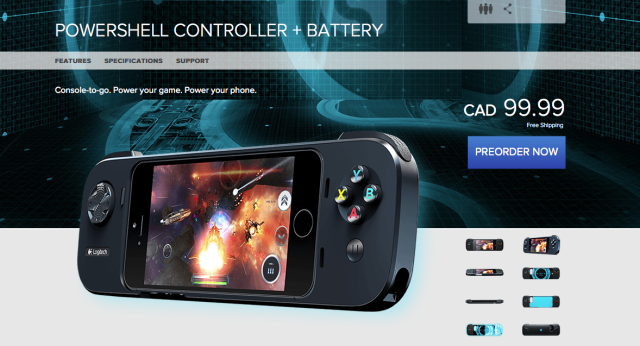 The MFi Logitech game controller retails for $99.99 and it is compatible with the iPhone 5, 5s and the fifth generation iPod Touch, as it connects via the Lightning connector. It features console-style controls: analog d-pad (left), and A, B, X and Y face buttons on the (right), alongside shoulder buttons.

The accessory also comes with an integrated 1500MAH battery, increasing the available power capacity of the iPhone: users can charge their handset with the included micro-USB cable.

“We designed this controller to deliver a true console-gaming experience on an iOS 7 mobile device,” said Ehtisham Rabbani, general manager of the Logitech gaming business in a press release sent to iPhone in Canada. “With gaming so pervasive on the mobile platform – our research shows that 87% of iPhone and iPod touch users play games on their device – it’s time to revolutionize the experience.”

The list of compatible titles includes Bastion, MetalStorm Aces, Galaxy On Fire 2 HD, and Nitro, but other titles will join soon, as developers have shown interest in building controller support into their games, especially that now the hardware is available.

The PowerShell Controller + Battery is available for preorder via Logitech’s website for CAD $99.99.