MOGA Ace Power, the first iOS 7 game controller, was officially unveiled today. The MFi controller is compatible with Apple’s iPhone models with a Lightning port, the iPhone 5, 5c and 5s, and the fifth-generation iPod Touch (via MacRumors).

The MOGA controller comes with dual analog sticks, a D-pad, action buttons, a headphone jack and L1/R1 L1/R2 buttons, and includes a battery pack. This means the game controller will pack enough juice to keep the iPhone charged while you’re playing.

Touch Arcade and CNET reviewed the $99 accessory, and while the verdict is fairly positive, they do agree that the MOGA Ace Power doesn’t feel worth its price. It has lots of potential for shooter games, and games developed for consoles, but it didn’t feel worth $99 due to the plastic feel, the rattling of the sliding mechanism and buttons, and a long, slightly bulky design. The second bad they point to is the limitations of the Lightning connector, which means older iPhones are excluded. 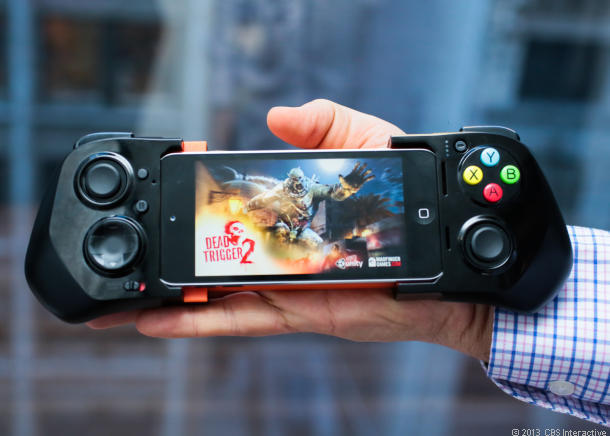 Image leaks of the MOGA controller surfaced right after Apple announced the controller API. While MOGA is the first to launch the MFi controller, other companies, such as Logitech, are preparing iOS game controllers as well.

iPhone owners interested in purchasing a MOGA Ace Power can reserve theirs through MOGA’s website. The controller cost $99. Let us know if you are going to jump on this one.