Despite facing tough competition in each market segment, Apple has managed to retain its influence on determining the course of consumer electronics, Steve Wozniak said in an interview with Bloomberg. 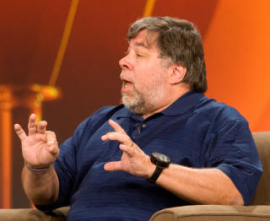 Companies such as Amazon.com Inc. and Google Inc. “all have great ideas, but sometimes you need a critical mass of loyal users that will instantly buy and go this direction,” Wozniak said in an interview at Bloomberg’s Berlin office this week. “Apple is really good at setting a standard with a new device. Apple still has its halo in that regard.”

Horace Dediu of Asymco seems to agree with this point of view. From an analyst’s perspective, Apple “sets the basis of the competition, and then the race is on to climb the trajectory of improvement. Apple release a product that defines a category or disrupts an industry, and it becomes obvious what needs to be built.”

While Wozniak thinks the same, he has a couple of suggestions for Apple. For instance, he said the company should consider opening up its ecosystem, by allowing buyers of mobile devices running Windows or Android to use the iTunes media-management software.

“We used to have these ads, I’m a Mac and I’m a PC, and the Mac was always the cool guy,” he said. “And ouch, it’s painful, because we kind of are losing that.”

From the co-founder’s perspective, an Apple wristwatch is definitely a welcome innovation, especially if the company improves the voice-recognition function of its Siri software.

“Apple can keep engineers working so intently toward the right product, you don’t have to rush something out ahead of time,” he said.

BlackBerry will ultimately have to switch to the Android operating system, he said, adding that the company’s “good reputation as a hardware builder” and their brand should provide enough differentiation for the company’s products.