Apple employees seem to love Tim Cook less than they did a year ago, according to the Glassdoor’s most recent report (Via CNN). 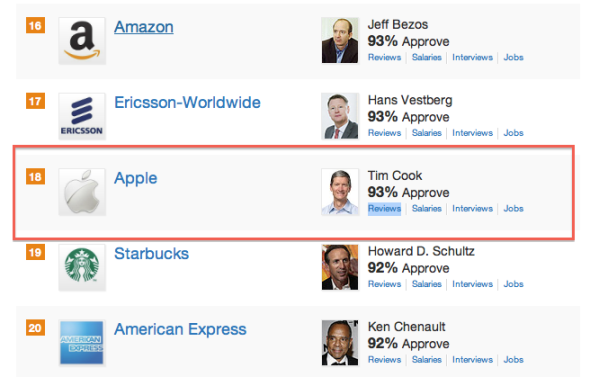 If the stock price drop wasn’t enough for investors and Apple fans, here’s another woe: Tim Cook’s popularity among the company has dropped significantly. After topping Glassdoor’s tech CEO list and CEOs across all industries back in 2012, the Apple Chief Executive Officer has dropped to 18th on the list of most liked tech CEOs in 2013.

Looking at Cook’s approval rating, it has dropped to 93%, down 4% from a year prior.

This year the top spot went to Mark Zuckerberg, who has received an employee approval rating of 99%, compared to 85% last year. One thing worth noting here though: Facebook employees could cash their stock grants for the first time in 2012, following the company’s public stock offering.

Apple has had a tough year in 2012. You may recall the iPhone 5 supply shortage, the Apple Maps debate and let’s not forget about the executive reshuffle. Even more, Tim Cook has issued a rare apology about Apple Maps, admitting the app fell short of the company’s high standards.