The latest ad created by Rogers, Telus and Bell as part of their ‘Fair for Canada’ ad campaign against the Federal government’s wireless rules, compares the selling of wireless spectrum to a “foreign corporation” (i.e. Verizon) as the equivalent to selling half of Canada’s water. Check it out below: 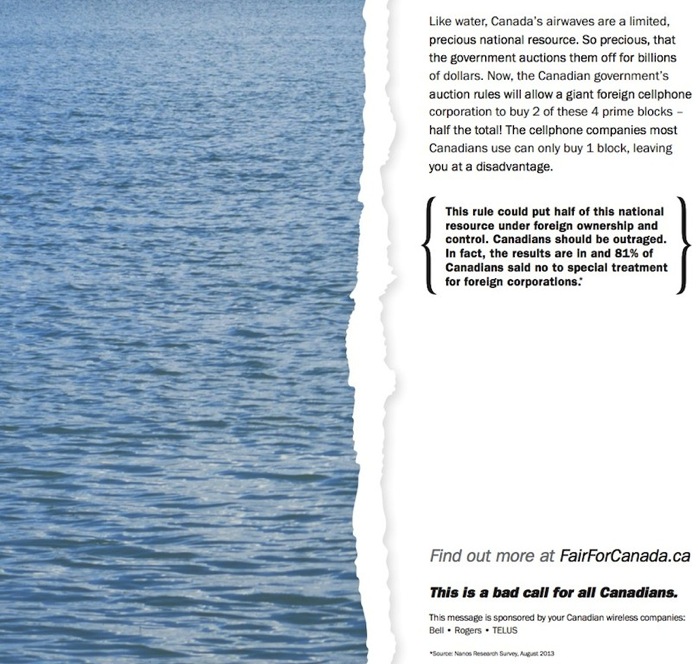 The ad says the wireless spectrum sale “could put half of this national resource under foreign ownership and control. Canadians should be outraged.” It then cites the Nanos Research Survey which claims a majority of Canadians said ‘no’ to special treatment for foreign corporations. It ends with the line “This is a bad call for all Canadians.”

Journalist Peter Nowak previously clarified the Nanos Research survey question that garnered an 81% response and questions how effective it was:

The Nanos survey is full of leading questions, with results that are foregone conclusions. For instance, here’s the question that got the 81-per-cent response:

As you may have heard, the Government of Canada will soon be auctioning access to a new type of airwaves for use by wireless companies. Under the current rules, it would be possible for a large foreign company to bid and win access to twice the amount of airwaves as most Canadian companies. Which would you think is in the best interest of consumers:

The overall theme of the water ad is in line with previous ads, which have stated Canadian jobs are at stake; many have criticized them as hypocritical, considering all three companies have previously outsourced positions outside of Canada.

A previous ad by Rogers, Telus and Bell explained why the companies were “making such a big deal” about the upcoming wireless spectrum auction. It’s not related to fear of competition, but rather “we actually care about wireless service in Canada.” 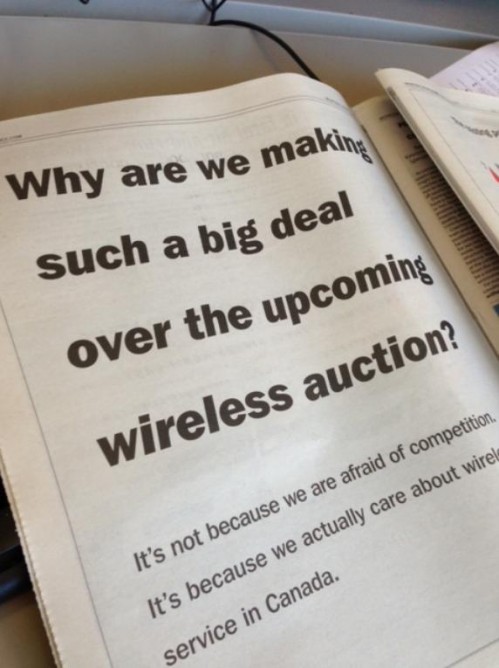 Industry Minister James Moore has criticized incumbents publicly by condemning their ads as “dishonest” lobbying. WIND Mobile CEO Anthony Lacavera also recently was outspoken against Rogers, Telus and Bell, lambasting the Big 3 for their “buffet of misinformation” being served to Canadians.

Some others have also created their own responses to the ‘Fair for Canada’ campaign while others have parodied the videos. Telecom analysts have also recently cited the widespread ad campaign by the Big 3 has caused backlash instead of gaining support.

Just yesterday the Federal government created their own response to the ‘Fair for Canada’ campaign, with the launch of the dedicated educational section ‘More Choices’ on Industry Canada’s website.

What do you think of this latest ad campaign by the Big 3? Should we be worried??