While Bell and Rogers have continued to top consumer complaints recorded by the CCTS, there has been a noticeable drop in complaints targeting Canada’s biggest carrier, the Commissioner notes in the mid-year 2016 report issued today. 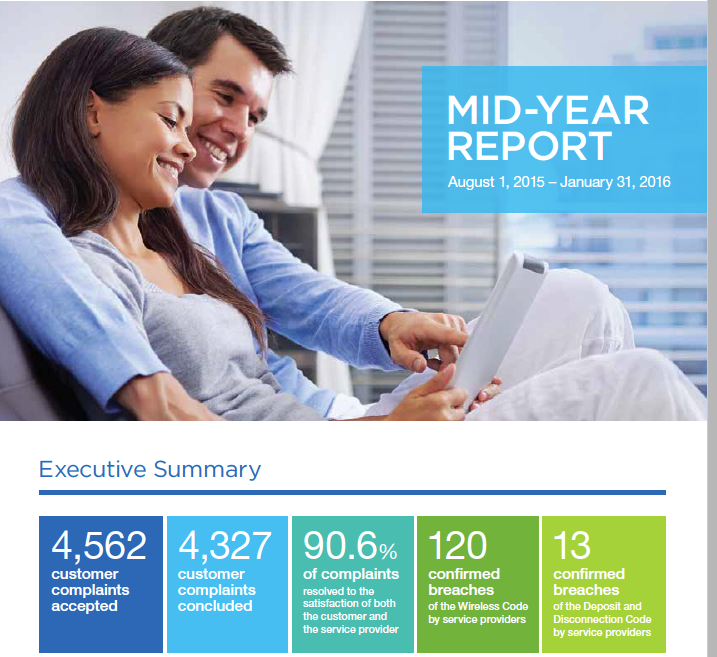 The CCTS recorded a total of 4,562 complaints between August 1, 2015, and January 31, 2016, down from the 5,468 complaints reported during the same period a year ago. Misleading information about terms accounted for the biggest percentage (12.3%) of total issues raised by Canadians during the aforementioned time frame, followed by incorrect charges (10.2%).

It seems as though Canadians are most satisfied with the quality of the services they receive, as inadequate quality accounted only for 7.2% of the total issues.

Bell continues to retain its title as the most infamous carrier, accounting for 36.8% of consumer complaints, followed by Rogers in a distant second with 9.6%. This compares to the full year of 2012–13 when Rogers was targeted by 27.78% of all complaints. A year later Rogers remained second on the “most complained about carriers” list, accounting for 20.98%. The latest full-year report (2014–15) issued by the CCTS shows only 18.2% of the total for Rogers, a nice improvement over time.

The mid-year CCTS report lists WIND Mobile as the third most complained about carrier, accounting for 7.5% of all complaints, followed by Telus with 6.8% and Virgin with 5.6%, respectively.

The momentum continues as Rogers again leads the industry in reducing the number of customer complaints to the CCTS. According to the 2015-16 mid-year report of the Commissioner for Complaints for Telecommunications Services (CCTS), complaints from Rogers dropped dramatically by 65% and Fido decreased by 22%.

“Today’s mid-year results show we’re continuing in the right direction towards overhauling our customers’ experience,” says Deepak Khandelwal, Chief Customer Officer, Rogers Communications. “While there is still work to be done, we’ve started tackling some of the industry’s biggest issues head on, like roaming, by introducing services that are easy to use and save customers’ time.”