Eastlink to Launch iPhone 6, iPhone 6 Plus on Nov. 7, Pre-Orders Now Available [u]

Halifax carrier Eastlink has announced it will launch iPhone 6 and iPhone 6 Plus sales this Friday, November 7, with pre-orders now available for the newest smartphones from Apple.

Eastlink says the entry iPhone 6 will start at $0 upfront plus $25.63 per month on a 2-year term, while the 16GB iPhone 6 Plus will be $0 upfront with a $30.21 per month plan over two years. Customers can pre-order devices here.

“Customers looking to get the most out of these remarkable new iPhones will love Eastlink’s leading LTE network,” said Matthew MacLellan, President, Eastlink Wireless. “Our incredible data speeds, extensive coverage, and savings on Nationwide plans make choosing an iPhone on Eastlink an ideal choice.”

Full pricing and plan details are below: 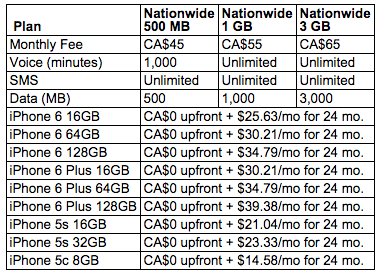 This summer Eastlink announced they had the “most extensive wireless coverage” in Atlantic Canada after joining up with “a unique network partner”. Back in early 2013, the carrier launched their 4G LTE network, which makes them ready for the newest iPhones.

Am I missing something on these $0 upfront prices? We’ve reached out to Eastlink for clarification.

Update: Eastlink confirmed the $0 upfront pricing is indeed correct. Now, excuse me as we pack our bags and move to Halifax.