How do you know when your promo plan is making waves? When your competitors start matching your plan too, which is what we saw Virgin Mobile do yesterday, as they released a $40/4GB plan to combat Telus-owned Public Mobile’s $38/4GB promotion.

Now, Fido has jumped on board, copying Virgin Mobile, in an effort to stop customers from leaving to Telus-owned Public Mobile, only for those in B.C. and Alberta. 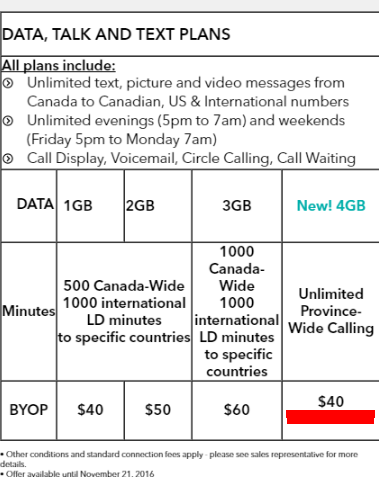 This plan does not include Fido Roam or free Spotify for six months (but if you had it previously you will retain Spotify).

For $12 extra, customers can add on unlimited Canada-wide calling, which makes the plan $52 for 4GB of data. Otherwise long distance in Canada is charged at $0.55 per minute.

Update: Fido has added 1000 International calling minutes to this plan as well. Expect long line ups if you’re going to switch in-store. You will be better off calling, talking to online customer chat on Fido’s website, or hitting them up on Twitter.

If you want to jump on this plan, you need to call/chat with Fido and ask for it (mention Public Mobile or Virgin’s deal). According to RFD, users are noting this is indeed for existing customers and not new activations, but one user claims it’s open to everybody.

This offer lasts until November 21, 2016, the same expiry date Virgin Mobile has set for their promo.

Both of these offers don’t compare with Public Mobile’s offer, though. Public Mobile has a loyalty perk, where users save $1/month after being with the company for a year, and discounts keep going up annually until it maxes out at $5/month off in year five. So essentially the $38/4GB plan will become $33/4GB (not counting any $1/month off credits from referrals).

This is one of the best plans we’ve seen in a while, and all unlocked iPhone users should get this if it fits their needs.

Public Mobile announced this morning they are opening up SIM card sales and pick up at specific Telus tower locations in Vancouver, Toronto and Montreal, for last minute users looking to jump on their promo, which expires on November 20th.